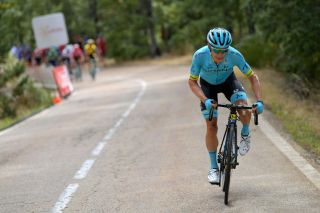 Colombian Miguel Ángel López was far and away the most aggressive of the overall contenders on the Vuelta a España's incursion into the sierras west of Madrid during stage 18, regaining the Best Young Rider's jersey through a series of attacks but failing to trouble overall leader Primož Roglič (Jumbo-Visma).

When the Astana rider began the first of several surges 60 kilometres from the line, initially scattering the Jumbo-Visma climbing 'train', it looked as if an all-out assault on Roglič might just be possible, particularly with teammate Omar Fraile waiting for him ahead in the break.

But Roglič closed López's brief attack down with key support from Jumbo-Visma mountain riders Sepp Kuss and Neilson Powless before taking charge on the final climb.

Whilst one Slovenian proved impossible to beat, López's repeated challenges allowed him to shake off another – Tadej Pogačar (UAE Emirates) – with the young Slovenian losing nearly a minute at the line and dropping to fifth.

López moved up to fourth in the overall standings whilst Nairo Quintana (Movistar) ended up as collateral damage in the battle for the white jersey between López and Pogacar. Quintana also lost a minute, dropping from second to third overall behind Movistar teammate Alejandro Valverde.

Valverde later defended his lack of collaboration with López and failure to take a turn in the chase group because Quintana was behind and he did not want to risk the Colombian losing more time.

But whilst the Spanish media is still fizzing with the idea that Valverde might still have it in him to win the Vuelta a España, the most aggressive rider at the moment is proving to be López.

"I didn't get any collaboration from my rivals during my attacks but all the same, I've managed to get closer to the podium today," López said. "I've also regained the Best Young Rider's jersey and it's the last year I can win this.

"It was a difficult stage, the tactics have to be exactly right to work, it's like a jigsaw. We were missing another rider ahead in the break [to support me], but it was hard to get another rider up there."

Three times the leader of the Vuelta in the first week, in the second week of the Vuelta, López was less consistent on the climbs. In the third he missed a mass breakaway on the flat stage to Guadalajara and then had a 10-second penalty for receiving a hand sling from a teammate, slumping to fifth.

López insists that he can still turn the tables for the podium and on Thursday's stage, he moved back into fourth again.

"There is a lot of terrain left, with two interesting stages," López argued. As things stand, López has a 46 second deficit to make up on Quintana if he wants to make it onto the Vuelta podium for a second year running, whilst he is now 32 seconds clear of Pogacar.

As for the Slovenian, Pogacar was disappointed to have lost time, but as he told journalists whilst warming down behind the winners' podium, "maybe it was just a bad day.

"Friday will be more relaxed, maybe, but Saturday" - the final mountain stage - "will be a really difficult day. Anything could happen there.

"It will be full gas from here to Madrid. But now I'm not so high up the overall classification, I can pull off some kind of surprises."

With two mountain stage wins already in his palmares this autumn, as well as a lengthy spell on the provisional podium and in the Best Young Rider lead, it certainly wouldn't be the first time in this year's Vuelta a España.