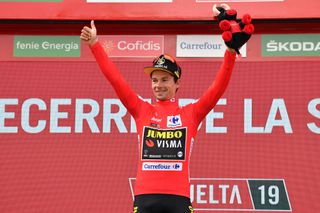 Primoz Roglic survived another day in the mountains and even added to his advantrage (Image credit: Justin Setterfield/Getty Images)

After Wednesday’s tumultuous flat stage of the 2019 Vuelta a España,  overall leader Primož Roglič (Jumbo-Visma) had a much more straightforward day in the  mountains on Thursday.

Multiple attacks by Miguel Ángel López (Astana) left Roglič looking isolated, but Jumbo-Visma had Neilson Powless in the break ahead to provide the Vuelta leader with support if needed.

But key to it all was Roglič’s own strength, with the Slovenian more than able to chase down López's attacks and then follow the Colombian, closely shadowed by Alejandro Valverde (Movistar) and Rafał Majka (Bora-Hansgrohe) all the way to the finish in a small group of GC favourites.

Second at the finish, claiming a time bonus ahead of Valverde and stamping a reminder of his domination of the GC in the process, Roglič  then imposed his usual unwritten rule of three questions for the media. But for all his brevity, he underlined the importance of ticking off another difficult mountain stage.

“For sure, I’m closer by one day and that’s important,” Roglič said. “It was another hard day, but  another good day for my team. So  we can be optimistic and stay focussed.”

Seemingly isolated on the last climb, Roglič pointed out that as had happened on Wednesday when there was a 40-rider breakaway from the gun, Jumbo-Visma had put in the hard work in the first two thirds of the stage. Come the final part of the course, he was the man to watch.

“Yesterday, you probably didn’t see it, but our team was pulling from kilometre 0 to try keep the break under control,” Roglič said. “Ok, Astana had López there attacking, but I had Neilson in front waiting for me. Then the final section is really about me and what I can do. Luckily, I had good legs and I was able to finish the job.”

Although much of the focus is on Saturday’s final mountain stage and summit finish, Friday’s stage to Toledo, whilst far less tough on paper, could present challenges if another major break goes clear. The weather, too, is forecast to be very bad, perhaps making for added difficulties.

Roglič recognised that after Wednesday’s fraught stage, in which he narrowly avoided losing the lead, he would be doubly careful on Friday.

"Every day is important, but we got a lesson on Wednesday. And it’s going to be full gas, again,” Roglič said.