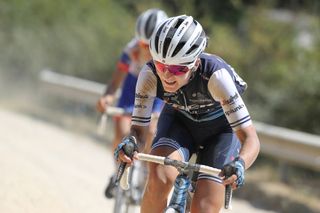 Trek-Segafredo's Elisa Longo Borghini will attempt to win the third Giro dell'Emilia Internazionale Donne Elite of her career – having also won in 2015 and 2016 – when she lines up in Bologna, Italy, on Tuesday. The UCI 1.Pro-ranked women's one-day race was won last year by Parkhotel Valkenburg's Demi Vollering, who edged out Longo Borghini on the line at the top of the final climb of San Luca.

The race normally takes place in October, but has found a new, mid-August slot on the revised 2020 calendar – on the same day as the men's event – which was forced as a result of the coronavirus pandemic, and Longo Borghini thinks that the hotter time of year may change things.

"Although the route of Giro dell’Emilia is easy to read – practically flat up to San Luca, which serves as a springboard – you have to be in good condition because the final climb does not forgive," Longo Borghini said on her team's website on Monday. "Just like for our first races in the the Basque Country and at Strade Bianche, it's good to keep in mind the hot weather as a key factor, too."

The 28-year-old Italian has just returned from an altitude camp at the Alpine ski resort of Isola 2000, where she trained alongside teammate Lucina Brand, Ruth Winder and Tayler Wiles, all of whom will line up alongside Longo Borghini for Tuesday's race, with Lizzie Deignan and Lauretta Hanson completing the squad.

Longo Borghini on return to competition: I love racing, I'm made for racing

"The Giro dell'Emilia is a race I've always liked, with a finish that suits my characteristics. It's no coincidence that I've managed to get nice satisfaction out of it. I still have some regrets about how it ended last year," Longo Borghini said, remembering Vollering overhauling her just before the line, "but it will serve as extra motivation to try to do better at Tuesday's race.

"We have to be ambitious and look for the big target – not only on a personal level, but above all as a team."

The Equipe Paule Ka squad will be non-starters at the race on Tuesday following the theft of the team's bikes from the hotel they were staying at in Bologna on Saturday night.

Longo Borghini's own Trek-Segafredo team was also struck by thieves on the eve of Strade Bianche at the end of last month, but was able to use spare bikes and borrow bikes from the men's Trek-Segafredo squad to ensure that they could still take part.