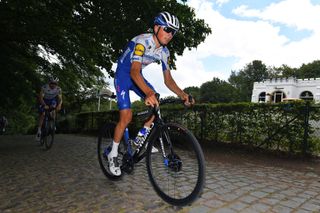 Vansevenant, 21, joined up with the Belgian team at the start of July, having completed his university studies in Bruges. Last year, he took overall victory at the Giro della Valle d'Aosta and finished sixth at the Tour de l'Avenir. Deceuninck-QuickStep announced the deal last August and Vansevenant is part of a growing stable of young talent at the team.

"With João Almeida, Andrea Bagioli [both 21 – Ed.], Remco Evenepoel [20], and now Mauri we have some young riders," Lefevere told Sporza. "I hope to add some youngsters to the team every year; that way we'll slowly but surely rejuvenate the Wolfpack and prepare for the future."

In addition to Vansevenant, Bagioli, Almeida and Evenepoel, the team has nine other riders aged 25 or under on their roster, including 22-year-old US time trial champion Ian Garrison, Álvaro Hodeg – who has four WorldTour wins under his belt at the age of 23 – and Vuelta a España stage winners Fabio Jakobsen (23) and Rémi Cavagna (24).

Vansevenant is the son of ex-pro Wim Vansevenant, who rode in the Lotto set-up for much of his career, and he is named after 1991 Vuelta winner Melcior Mauri. Lefevere, whose team is one of the youngest in the WorldTour at an average age of 26.25, said that he doesn't expect his new young charge to start taking results right away, as Evenepoel has done, but that he would get time to develop without pressure.

"Mauri did very well at U23 level and showed his climbing ability on multiple occasions," said Lefevere in a team press release. "He is still very young so will get the time to grow as a professional without pressure.

"We don't expect anything from him in the short term – just to watch closely and learn from the more experienced riders. He can help the team if necessary and when he gets the chance to show his talent in the mountains, we will certainly not stop him."

Vansevenant has already spent time with the team at their Flanders training camp in mid-June as well as the winter training camp in Calpe. He tackled the cobbled climbs of Gent-Wevelgem and the Tour of Flanders but sees himself as a climber more than a Classics man.

"It was really fun but I'm more of a climber than a Classics rider," Vansevenant said. "Riding uphill really suits me; I like those tough mountain stages. But the future will show which role will suit me best. First, there are still a lot of things I have to learn.

"I wanted to finish school first. It's not compatible with being a professional cyclist. I'm very happy to have my degree; for me it was a requirement. I'm comfortable now. It gives me certainty for the future. Sooner or later I'm going to need it."

Vansevenant is currently in the Dolomites at a team training camp, and is set to make his Deceuninck-QuickStep in early August at Milano-Torino (August 5). His debut season will include rides at the Critérium du Dauphiné (August 12-16), the Grands Prix Québec and Montréal in September, and La Fléche Wallonne on September 30.