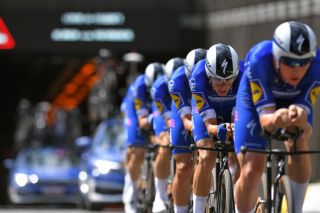 Deceuninck-QuickStep have announced the signing of Mauri Vansevenant, the winner of this year's Giro della Valle d'Aosta and son of ex-pro Wim Vansevenant.

The 20-year-old Belgian will join the team in July 2020, and has signed a three and a half year deal with the squad. The contract is due to commence after Vansevenant completes his studies at Howest University in Bruges.

Vansevenant won the Giro della Valle d'Aosta, one of the leading proving grounds on the U23 calendar, by 4:30, and went on to finish sixth at this month's Tour de l'Avenir. Past winners of the Italian race include Thibaut Pinot, Fabio Aru and Pavel Sivakov.

"It is fantastic to know that I've signed for Deceuninck-QuickStep," said Vansevenant in a statement released by the team. "It's a big team and I am hoping that I can progress with them and learn their methods and have a beautiful future. I had a few teams to speak to, but I know I made the right choice and I had made my mind up."

Vansevenant, who is named after 1991 Vuelta a España winner Melcior Mauri, finished fifth at the Course de la Paix earlier in the year, before going on to succeed in Italy. His father Wim was a professional from 1995 to 2008 and rode part of his career for QuickStep's rival team Lotto.

"I come from a cycling family – my father was a professional rider for 14 years, so it is in my blood," Vansevenant said. "I have really enjoyed my season this year, especially winning the Giro della Valle d'Aosta on a very hard course and being up against the best of my generation.

"It was the same at the Tour de l'Avenir, where I spent one day in the yellow jersey, which was a fantastic feeling and I kept 6th place on the overall GC, after ten days of hard racing."

Team CEO Patrick Lefevere added that the signing of Vansevenant is "excellent" for the team, which has a focus on developing youth.

"We have a big focus on developing young talent and he is one of the best," he said. "Mauri's results this season speak for themselves and we knew there would be competition for his signature, so we are delighted to get him."

We are happy to announce that we have signed Giro della Valle d'Aosta winner Mauri Vansevenant, who will join the team next summer: https://t.co/A7zUxZR6tG pic.twitter.com/ko6uYiSlPpAugust 31, 2019