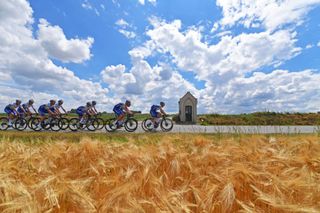 Members of the Deceuninck-QuickStep team train in Belgium ahead of the restart of the 2020 racing season (Image credit: Getty Images Sport)

Twenty-one-year-old Belgian climber Mauri Vansevenant will officially turn professional with WorldTour team Deceuninck-QuickStepon July 15, as had always been the plan since last year. The unusual start date is due to Vansevenant first having had to complete his university studies, but now the youngster is ready to race at the highest level.

Vansevenant – who is the son of former pro Wim Vansevenant, and is named after 1991 Vuelta a España winner Melchor Mauri – truly came to Deceuninck-QuickStep manager Patrick Lefevere's attention after he won the Giro della Valle d'Aosta in Italy last July.

He's already had the opportunity to get to know a number of his new teammates at a recent training camp in West Flanders, where the squad trained on parts of the courses of a number of one-day races.

"It was fun," Vansevenant told Sporza.be on Monday. "I was well taken care of. It's a nice gang, with a lot of Belgians, and it's a pleasure to be riding with them. I always dreamed of it, and I was immediately sucked into the group atmosphere."

Along with fellow 21-year-olds – and new signings – João Almeida and Andrea Bagioli, Vansevenant is one of the youngest riders on the team. The youngest, of course, is 20-year-old Remco Evenepoel, who joined Deceuninck-QuickStep last season, and immediately impressed thanks to winning the Clasica San Sebastian and taking the overall title at the Baloise Belgium Tour, as well as becoming the European time trial champion.

"I get on very well with him," said Vansevenant of Evenepoel, "but we don't call each other every day. He's busy enough already.

"But he certainly made an impression at the training camp, and not only on me. It's incredible how strong Remco is. He can ride on the flat, uphill, downhill, on the side. It's incredible that he can do it all, but he can, and he still does it with his feet on the ground."

Asked whether he could become Evenepoel's right-hand-man in the future, Vansevenant replied: "Maybe. That would be a fantastic experience, but time will tell. It's still too early to say."

Alongside Evenepoel, the two riders could carry the bulk of Deceuninck-QuickStep's future Grand Tour hopes. Evenepoel will make his Grand Tour debut this year at the Giro d'Italia in October, while Vansevenant will be 'eased in' with a race programme that nevertheless includes some major races.

According to Sporza, Vansevenant will line up for the Tour de l'Ain (August 7-9), followed by the Critérium du Dauphiné, the GP de Québec and GP de Montréal in Canada in September, the Coppi e Bartali, Flèche Wallonne and the Brabantse Pijl in October. If selected for the under-23 Belgian national team, he'll also ride the World Championships in Switzerland in late September.