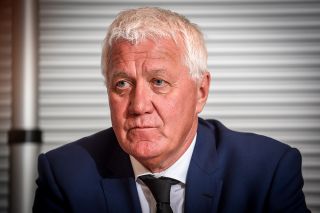 Deceuninck-QuickStep manager Patrick Lefevere has given his opinion on the new 2020 race calendar, which will see the remaining WorldTour races crammed into a three-month period from August to November.

In his weekly column for Het Nieuwsblad, the veteran team manager outlined the big challenges facing the peloton upon the presumptive return to racing after the COVID-19 coronavirus lockdowns are eased.

Primary among the concerns is the challenge of moving staff, riders and equipment around during a packed schedule which will see Grand Tours overlap and will mean WorldTour teams have to send three squads to as many as three races on the same day.

"The course has taken a step forward in the past week: the new calendar is now really on the table. The design is, of course, far from ideal," wrote Lefevere in Het Nieuwsblad.

Deceuninck-QuickStep boss Lefevere: If we don't race this year, I'll no longer have a team

"There's an overlap of the Giro d'Italia and the Walloon Classics, and overlap of the Giro and the Vuelta a España, and with Paris-Roubaix on top. There are 23 WorldTour races in 100 days and 300km in Milan-San Remo on the second weekend. Normally, riders in San Remo already have 20 race days in the legs. It's a lot and probably too much of a good thing."

Only five WorldTour races have been run so far in 2020, ending with Paris-Nice in March. Several of the top-level races yet to be run will not be raced later in the year – the Volta a Catalunya, Itzulia Basque Country, the Tour de Romandie and Tour de Suisse among them.

However, some of the less prestigious WorldTour races originally scheduled for later in the season, such as the Prudential RideLondon-Surrey Classic and the Tour of Guangxi, remain in place in the new calendar. Their position, nestled among the Grand Tours and Monuments, is not ideal, writes Lefevere.

"I don't have a bad word to say about the races in Canada – they gave cycling a new lease of life at the time, both in international standing and in organisation. But do they have a place on the calendar this year? We certainly shouldn't talk about the Tour of Guangxi – that will be an obligation for the riders even more than usual.

"At the same time, I know it's not the time to be difficult. The peloton can count its blessings if we still have races this season, whatever the circumstances. We're going to make the best of it. Our logistics manager Julie Verrept will have a difficult puzzle to solve later on, but I'm convinced we can handle three programs side by side."

Such new logistical challenges include juggling the overlaps between the Giro d'Italia, Vuelta a España, Tour of Guangxi and cobbled Classics, as well as the Tour de France, Canadian races, Tirreno-Adriatico and the World Championships. Proposed solutions, writes Lefevere, include riders finishing the Giro early and converting a camper van into a mini-team bus.

"Anyway, we'll have to be creative – in the final days of the Giro, staff can be transferred to the Vuelta," wrote Lefevere. "Usually you don't finish a Grand Tour with all your riders, so the staff can be reduced too. We have two team buses and one camper which we now use after races as an ice bath and as a bar for the staff. We will upgrade it now to be a fully-fledged bus."

The team will stick to the pre-pandemic rider plans as much as possible, with Remco Evenepoel heading to the Giro, which rules out the Ardennes Classics. Julian Alaphilippe will take on the Tour de France, then the Ardennes and Tour of Flanders. As for the sprinters, Sam Bennett will go to the Tour, Fabio Jakobsen to the Giro and Álvaro Hodeg to the Vuelta.

It will be an uneven return to racing for a number of reasons, Lefevere wrote, though he added that simply getting back to competition will trump all the misgivings.

"And apparently the doping tests have also fallen by 95 per cent. As my mother used to say, 'the naughtiest weasels take the best eggs.' You can have a lot of different reservations about the restart of the season but being able to race again is currently much more important that all the possible counter-arguments."