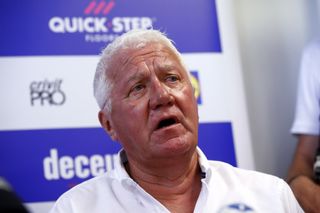 Deceuninck-QuickStep boss Patrick Lefevere has told the Belgian media that if there ends up being no more racing this year due to the ongoing coronavirus crisis, he may not be able to keep his team afloat into 2021.

"If we don't race this year, I'll no longer have a team," Lefevere told Sporza.be TV show Extra Time Koers on Wednesday.

"Fifty per cent of the teams will disappear from the peloton," he said. "Team Ineos are sitting on a mountain of money, and the French are getting part of their wages paid back by the state. They will have fewer difficulties, but my team will be in trouble.

Lefevere: The cycling model could collapse if the Tour de France is cancelled

"I'm not stupid," continued Lefevere. "I am an accountant by training, and have been in the trade for 40 years. If there is no racing anymore, many cycling teams will die."

The announcement of the new UCI calendar for the remainder of the 2020 season, starting with the men's and women's Strade Bianche on August 1, has prompted mixed reactions from the cycling world, with some pessimistic about how many races may really be able to take place, and others simply excited about the prospect of a retrun to racing.

"I'm known as the most critical person in the cycling world," Lefevere said. "But I will not complain about the calendar. In the current circumstances, we should be humble and pray that we can still race this year."

According to Het Nieuwsblad, Lefevere also said that the team was still intending for Remco Evenepoel to make his Grand Tour debut at this year's rescheduled Giro d'Italia, which is set to run from October 3-25 – even though it's now clear that it will clash with another of his original goals, Liège-Bastogne-Liège, which now has an overlapping date of October 4.

"We'll stick to the plan of Evenepoel riding the Giro, so he'll drop racing Liège. It's a pity, but he's only 20 years old. If he was 37, then it might have been a bigger deal," Lefevere said.