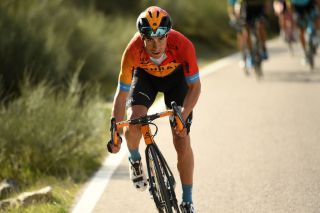 The reports of Chris Froome's possible mid-season transfer continue to swirl across the cycling world, but Mikel Landa, at least, feels very certain about where the four-times Tour de France winner will not be going  - Landa's own team: Bahrain McLaren.

"The team has already denied they are interested and Rod [Ellingworth, team manager - Ed] has told me that personally," Landa revealed to Cyclingnews.

"In any case, I'm here to ride my bike, I've not got a choice in the matter, and Bahrain McLaren have told me they are still focused on me for the Tour, things continue as normal, and that's put my mind at rest."

Landa has more experience than most of racing in a WorldTour team where he was  one of several Grand Tour leaders:  most recently in Movistar, but before that at Team Sky and even back in Astana, with Fabio Aru also a leader during the 2015 Giro d'Italia, where Landa first confirmed his Grand Tour talents.

Landa preferred not speculate about any power struggle at Team Ineos between Froome and the other top names in the team, only saying "when I was in Sky it was a different situation. I don't know [Egan] Bernal well enough to know how it's all working for each of them."

Landa did agree, though, that in general co-leadership can cause difficulties, pointing out with a wry chuckle that "only one guy wins."

While question marks are looming over Froome's future at Team Ineos, for Landa himself,  at least one issue has been resolved: a nagging rib injury caused when he was struck by a car in a hit-and-run crash during a  training ride early this year.

With the injury behind him, and no further setbacks physically, Landa is slowly but surely beginning to build up for the Tour de France, which remains his main goal of the season.

"Fortunately, this long lay-off  because of the lock-down was very beneficial for the rib injury," he says.

"I'm now at almost 100 per cent. I've been able to see a physiotherapist, too, to check up on it, once or twice during lockdown, and for the last month or so I've been absolutely fine."

While the lockdown has brought a silver lining in terms of recovery from the injury, one of its many downsides was that courts in Spain have been operating at a near-standstill for the last two months. As a result, Landa says,  there's been  no progress on possible legal charges against the hit-and-run driver responsible for the crash, although Landa's keeping a close eye on what can be done about that situation in the future.

Landa, along with the rest of the Spanish riders, had recently counted down the days to the first chance to go out training on his local roads. The Spanish lockdown on outdoor sport ended two weeks ago.

"I was on the turbo for the first part of the lockdown, taking things easily and now we've been allowed out, I've been enjoying riding a lot more, particularly as we were lucky enough to have good weather when that happened. Although I'm still not getting into high-intensity training yet, because there's still a long way to go before we can actually race.

"It's definitely good to have races on the horizon, though,  particularly compared with as little as two months ago when things were far less certain. Now we're seeing that at least some of the races this year aren't going to disappear and they have even got specific dates: that's something we can all be pleased about."

Riding the Vuelta on home roads in the Basque Country

He has not, yet, discussed what races he will do beyond the Tour, his main objective of the season. However he emphasises that it will be vital to have ridden some races beforehand to polish the form while bearing in mind too, that, there could be quarantine periods before and after any events abroad.

"So it's too early to say anything for sure, but the Dauphine could well be there on my program. I'd need to race  a couple of events at least."

As for the  last part the calendar, Landa would not rule out riding the Vuelta a España at this stage in the game, particularly as it begins on home soil this year, in the Basque Country, with a stage finishing on Mount Arrate, the region's most emblematic climb.

"We'll have to see," he warns. "It depends on how everybody, including me, is feeling by that point in the year, because although we're not going to be racing a lot, this year races are going to feel painfully long, for sure.

"It's a great route this year for me, though, and it goes through the northern part of the country and over a lot of the climbs which I know the best,  too. So it's got its plus points for me, that's for sure."

One thing that Landa does know for sure about the 2020 Vuelta, regrettably, is that  the Fundacion Euskadi - Orbea squad will not be taking part.

Landa is president of the Basque ProTeam squad, the last surviving fragment of the former Euskaltel-Euskadi squad, which he helped save from economic collapse a few years back and which is due to be sponsored, once again, by Basque telephone company Euskaltel, in their return to the sport after an eight-year absence. However when the Vuelta released the names of its three wildcard teams for 2020 a few weeks back, the Fundacion Euskadi-Orbea squad was not among them.

"It's a pity," Landa says, "but we'll try and get through the season the best we can with whatever races we can, and that's all we can do." - a strategy that holds true, in such turbulent times, for the peloton and the sport in general.