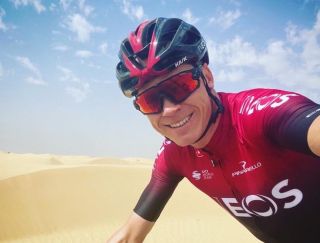 The Cyclingnews story that Chris Froome could leave Team Ineos mid-season so he can have a clear leadership role at the 2020 Tour de France has sparked a wave of reaction and speculation and exposed the leadership battle underway way at the British team.

The news also kicked off a debate about if Froome could win a fifth Tour de France after the terrible injuries he suffered last summer and sparked discussions about which team would want to sign Froome and who has the resources to pull off such an audacious deal, especially mid-season and before this year's COVID-19 delayed Tour de France.

The idea that Froome could leave Team Ineos to secure a leadership role indicates he believes in his recovery from his devastating 2019 crash and is ready to prioritise team loyalty and sacrifice the strength of Team Ineos in exchange for a shot a historic fifth Tour de France victory.

It appears that the tension at Team Ineos has been brewing for a while. The British super team has the last three Tour de France winners on its roster but only one rider can win the yellow jersey each year.

23-year-old Egan Bernal was given a five-year deal in 2018 that runs until the end of 2023 and confirmed his worth by winning the 2019 Tour de France. Geraint Thomas turns 34 on May 25th and his contract ends in 2021, while Froome will turn 35 on Wednesday and is out of contract at the end of this season.

Froome limited his transfer talk when he made his return to racing at the UAE Tour in February but was keen to secure a contract for 2021.

"Obviously, I have my loyalties to this team and it feels like home after 10 years of being here," he told Cyclingnews in February. "But at the same time, I need to get something signed before we carry on."

During the COVID-19 lockdown, Froome spent long days in his 'pain cave', completing his rehabilitation and working on his fitness. While his rivals were unable to race and progress their form, Froome caught up and his confidence grew.

The Tour de France in September became his 'number one target'. Three weeks ago he announced he was "here and ready" to go for a fifth Tour de France victory.

"My dream, when I retire, would be to have won more Tours de France than anyone else," Froome told French newspaper L'Equipe a day later, suggesting to another media group that it "would definitely be one of the biggest comeback stories in sport."

Bernal has been in lockdown in Colombia since March and has always been diplomatic about team leadership at the Tour de France since team manager Dave Brailsford said he and Thomas would focus on the Tour de France. However, Cyclingnews understands Froome's crescendo of ambitious talk has pushed Bernal to defend the leadership role he secured by winning the 2019 Tour de France.

Bernal opted to speak out via Eurosport Spain.

"I clearly understand the team in this situation. For them, let’s say, it could be interesting to win a fifth Tour de France with Chris, or another Tour with Geraint Thomas," he said. "But I also put myself in a position. I’m young, I’ve already won one Tour de France, and I’m not going to throw away an opportunity to win another Tour de France, that’s for sure. That I would sacrifice myself, being at my 100 per cent… I don’t think I’m going to do that, nor will he, nor will anyone."

The gloves were suddenly off in the fight for Tour de France leadership at Team Ineos, strengthening other teams' resolve to take advantage and try to sign Froome.

In reaction to the Cyclingnews story, Team Ineos quickly played down the chances of Froome leaving during the 2020 season but several teams were quickly considered a possible suitors.

While some teams are fighting for survival due to the COVID-19 pandemic, others are ready to take advantage of the situation and strengthen their rosters. The chance of signing Froome would be enticing to almost any sponsor and could help secure extra funding.

Movistar, Bahrain McLaren, UAE Team Emirates Israel Start-Up Nation and NTT Pro Cycling were quickly considered the best-placed to sign Froome for a variety of reasons, including budget, commercial interests, and the need for a Tour de France contender.

On Saturday, L'Equipe went as far as suggesting that "a still unknown British team would emerge next season to compete against Ineos with the support of a large English sponsor."

Cyclingnews sources doubted that idea, with one suggesting the French newspaper could have mistaken a recent merger between Telefonica's British O2 mobile network and cable company Virgin Media. Telefonica is the parent company of Movistar.

The Movistar team played down any for interest for Froome according to Spanish newspaper Marca, saying: "At the moment, Froome is not possibility for 2020."

It is unclear if that means Froome could be a possibility for 2021 and if he could eventually play a part on the O2-Virgin Media marketing strategy. The team has signed Enric Mas this year after losing Mikel Landa and Nairo Quintana but arguably lacks a true Tour de France contender after years of having too many.

A move to Bahrain McLaren would allow Froome to join up with former Performance Director Rod Ellingworth and loyal teammate Wout Poels, however several agents suggested to Cyclingnews that the COVID-19 pandemic has hit McLaren's luxury car sales and the fortunes of the Bahrain royal family who also bankroll the team.

UAE Team Emirates have recently extended Tadej Pogačar's contract until the end of 2024 and have preferred to invest in young talent rather than an existing Tour de France winner.

That leaves Israel Start-Up Nation and perhaps NTT Pro Cycling as the strongest candidates to secure Froome's services if he fails to reach a deal with Team Ineos.

NTT Pro Cycling could tap into Froome's African roots and they need a Tour de France leader as they try to rebuild under Bjarne' Riis influence.

Israel Start-Up Nation are in a similar position and may want to have Froome in their sky blue and white colours to make a splash when they make their Tour de France debut on August 29.

While the UCI WorldTour calendar has been postponed to late summer and squeezed into seven weeks, UCI rules allow mid-season transfer between August 1-15. This is traditionally after the Tour de France but the rules have not been updated to follow this year's Tour de France and offer a window of opportunity for an ambitious team.

According to a report by Israel television channel Sport 5, Israel Start-Up Nation billionaire co-owner Sylvan Adams would not hesitate to increase the squad's budget to sign Froome. However, the team refused to comment on the possibility of signing Froome saying: "We are not responding to any of our riders' interest or possible negotiations. But obviously, we respect Chris Froome as a rider and as a person, and of course his accomplishments speak for themselves."

It's important to remember that Adam's largely bankrolled Froome's presence at the 2018 Giro d'Italia that started in Israel. The cycling-mad billionaire might not want to miss out on a chance of seeing Froome lead Israel Start-Up Nation at the Tour de France.

If Team Ineos accepted a deal to release Froome from his contract to resolve their leadership issues, Froome's and Adams' ambitions could be equally matched and satisfied at Israel Start-Up Nation.