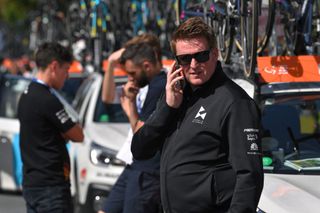 Rod Ellingworth has been tasked with taking Bahrain McLaren to the top (Image credit: Getty Images)

It’s widely regarded that while most teams would jump at the chance to sign Chris Froome, the reality is that few could afford the four-time Tour de France winner.

The leading contenders consist of wealthy teams with room for multiple Grand Tour leaders on their roster, and while Bahrain-McLaren tick those two boxes, manager Rod Ellingworth has told Cyclingnews that his team are in a holding pattern around contract negotiations.

The former Team Sky coach has disclosed that he and Froome are in contact – as he is with a number of his former riders – but contract negotiations have presently remained outside of their conversations.

Where next for Chris Froome?

Chris Froome headlines Challenge of Stars as uncertainty rumbles on

"Someone is going to have to take the punt and I don’t think it’s right to get into a chat about if we’ll take him or not and what the percentage chances are," Ellingworth told Cyclingnews, as he effectively ended any talk of a possible mid-season transfer.

"I still speak to a lot of the guys at Ineos anyway. Some of them have always seen me as someone who will give them honest opinions, even if I work for someone else. Yes, I’ve spoken to some and yes, I’ve spoken to Chris but in our conversations it’s been about how he’s going and the situation that we’re in.

"We speak, if you like, like I do with Luke Rowe or Geraint Thomas. We’ve had such long histories. So I’ve had a call with Chris but it wasn’t just about contracts. Yes, we’ve talked about the situation, the crash he had, and the future."

The transfer market is a complicated landscape at present. Teams are seeing sponsors drop out and wages are either being cut or deferred as teams try and stave off the economic effects of COVID-19.

Ellingworth’s team are no exception and publicly stating any concrete interest in a rider of Froome’s value could have a destabilizing effect on the roster. At the same time, Ellingworth has seen first hand how dominant Froome can be in Grand Tours, and he also believes that the former Tour winner can bounce back from his 2019 crash.

"The one thing is that he has a high price tag. Only so many teams can afford him, and the reason why I won’t say either way is because I don’t know what will happen with our team going forward. Some doors close and others open. Three months ago, we were all singing and dancing as a new team and then we get kicked in the teeth like everyone else has because of the virus," Ellingworth said.

"I wouldn’t say that he was someone that would be absolutely targeted by us. What we’re doing is building a team with the aim of winning Grand Tours. I know that Chris is out of contract and I have spoken to him about it. I wouldn’t say that we’re looking at him as an option right now but you’ve got to look at everyone. But right now we’ve got other things to be thinking about at the minute other than trying to recruit Chris Froome. I know that he’s looking around but right now I’d say there’s maybe a higher chance of him staying where he is, possibly."

Ellingworth, who announced that Bahrain McLaren’s main objective over the coming years was to challenge Team Ineos and the rest of the peloton Tour de France titles, did add that he believes Froome could return to the top of the sport after his 2019 crash, citing Froome’s personality and a similar situation involving another of his former Team Sky athletes.

"The one thing I know about Chris is that when he says he can still win, you wouldn’t put it past him. I remember when Luke Rowe had his accident. It was pretty severe, with multiple fractures, but he came back stronger because of the will to come back and the desire. Knowing Chris, he’s a proper fighter."

Bahrain McLaren signed several high-profile riders over the winter as they looked to improve their stage racing core. Rohan Dennis was relieved of his duties after walking out at the 2019 Tour de France, while Wout Poels and Mikel Landa – both of whom rode for Ellingworth at Team Sky – were drafted in alongside Pello Bilbao.

The arrival of Landa was a sign of intent for the team’s stage racing plans but, although the Spaniard is younger than Froome, he has also failed to deliver in Grand Tours. There have been mitigating circumstances at times but, from an experience and palmares point of view, Froome is head and shoulders ahead of his former domestique.

"We’re building, and part of the team is set with Bilbao, Landa and Poels," Ellingworth told Cyclingnews.

"Chris will feel that he needs to prove himself again. That’s why he’s done all that work. I can imagine that Dave Bralisford is also sitting and waiting to see what happens but, as we know, we can’t all just wait until September."

Tellingly, Ellingworth did hint at the idea of having multiple Grand Tour leaders at Bahrain McLaren in the future, if the opportunity came up. He admitted that Froome winning a fifth Tour at his current team would be a significant achievement, and that his own focus was on Landa for 2020, but the door does appear to be open, even if slightly, for 2021.

"For Chris, I think it would be a brilliant story if he could stay where he is and win another Tour. But at the end of the day, with someone like Egan around, and Geraint, I’m sure that they’re all thinking the same thing. The rivalry between them is pretty good, and they respect each other.

"At the moment, I want to focus on Mikel. I think that he’s got more to come. I do believe in a structure where you have to have a bit of pressure from within. The structure that Sky and Ineos have had, with leaders and back-ups, has proved pretty good. It’s tough to manage but it’s been successful."