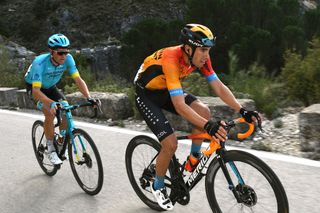 Bahrain McLaren's Mikel Landa finished second on his season debut in his new colours on the opening stage of the Vuelta a Andalucia on Wednesday, declaring himself "satisfied", despite having been well beaten in the sprint for the line by stage winner Jakob Fuglsang (Astana), who was also starting his season at the Spanish stage race.

Fuglsang was able to easily overpower and outsprint Landa in the final few hundred uphill metres of the stage after the duo had got away together on the final climb of Puerto de las Palomas, and then stayed away on the descent down to the finish in Grazalema, with Landa's Bahrain McLaren teammate Dylan Teuns leading home the rest, 25 seconds down on Fuglsang.

"I'm very happy about my first race. I think we've done a very good job, and, on the last climb, I attacked to try to win the stage but found a strong competitor in Jakob," Landa said in a team press release.

Landa to start season at Vuelta a Andalucia: If I have the opportunity to win, I will certainly not back down

It's nevertheless an encouraging start to the 30-year-old Spanish rider's season. Just under three weeks ago, Landa was hit by a car while out training, although he was lucky to escape without serious injury.

"Almost 20 days after my accident during training, I'm regaining confidence and have some good feelings," he said. "I'm also satisfied because, on the first day [back racing], you never know how you're going to go, and so I'm satisfied that I'm already competitive with other riders who have already competed this year."

In addition to Teuns having overcome a mechanical problem in the final 10km to take third place, Pello Bilbao took fifth place, making for a very satisfying day out for the new-look Bahrain McLaren outfit.

"We were tactically good and proved to be a really strong team," said Teuns. "Personally, I'm fine, and I still have good legs, like I did at the Volta a la Comunitat Valenciana, and I'll keep working for a good result, both on stages and for the overall."

Bahrain McLaren sports director Gorazd Štangelj added: "I'd like to underline the performance of the whole team, finishing with three riders in the first five. Other demanding stages await us, and we'll try to bring home the yellow leader's jersey."

The mountainous five-day race continues with stage 2 from Siviglia to Iznajar on Thursday, and concludes with a 13km individual time trial around Mijas on Sunday.