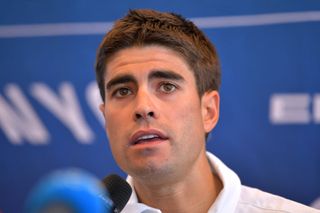 Mikel Landa will get his 2020 season under way with new team Bahrain McLaren at the Vuelta a Andalucia – also known as the Ruta del Sol – in Spain on Wednesday, and says that he will "not back down" if a race-winning opportunity presents itself during the five-day race, which runs from February 19-23.

Lining up in Alhaurín de la Torre to accompany the Spanish rider in his first race of the season will be Dylan Teuns and another new signing in Pello Bilbao – both of whom could be in the running for the GC at the mountainous stage race if Landa is unable to be in the mix for the overall.

Landa has joined Bahrain McLaren for the 2020 season following two seasons at Movistar, and starts his year with his new squad on the back of having been hit by a car while out training at the start of February, although he escaped without serious injury.

"I'm very happy to start this new experience with the new team," said Landa in a Bahrain McLaren press release. "I want to kick off the season well and to work with my new teammates. I have already participated in the Ruta del Sol several times before and, as always, it's a complete and tough race, with good teams and excellent riders who have already shown that they are in good condition.

"It's my first race, so one of the objectives is to check my preparation, and if I have the opportunity to win, I will certainly not back down," he said.

Landa will come up against the likes of his former Movistar team's Marc Soler and Enric Mas, Astana's Ion Izagirre and Jakob Fuglsang, Mitchelton-Scott's Jack Haig – who finished second overall at the recent Volta a la Comunitat Valenciana – and new UAE Team Emirates signing Brandon McNulty, fresh from his fourth place overall at the Vuelta a San Juan in Argentina earlier this month.

As well as overall contenders Landa, Bilbao and Teuns, Bahrain McLaren's squad for the Ruta del Sol boasts all-rounder Sonny Colbrelli, who's looking to build his form for the spring Classics, and could be in the mix for a stage win on stage 2 in Iznájar on Thursday, while Damiano Caruso, Matej Mohoric and young sprinter Ivan Cortina complete the seven-man line-up.

"Finally we start again with the races," said Colbrelli. "I'm very happy that my season starts with as challenging a race as the Ruta del Sol, where I will have a couple of chances to try to win.

"I just finished the preparation with my teammates in Tenerife [training camp], where I worked a lot on my endurance with an eye on the Belgian Classics," said the Italian.