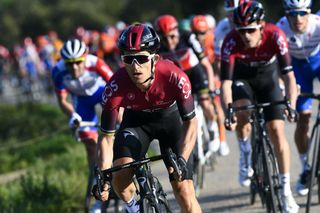 For a number of seasons, Michał Kwiatkowski (Team Ineos) has targeted both the spring Classics and the Tour de France, trying to manage his form from late February to the end of April, and then again in July. This year, as a result of the coronavirus pandemic and the subsequent reshuffled racing schedule, that busy four-month period has been condensed to an even busier 29 days.

Kwiatkowski spent the lockdown in France, and upon the restrictions being lifted on May 11, resumed his training outdoors. With a new UCI WorldTour calendar now in place, the one-day Classics will make up the majority of his new schedule, but it is the Tour de France selection that will set the tone for the ongoing preparations.

With only four stage races scheduled in Europe ahead of the Grande Boucle, with numerous others having been rescheduled or cancelled, riders are planning their preparations around altitude training camps.

Team Ineos have chosen the French ski resort of Isola 2000 as a base for their riders who live in Nice and Monaco, allowing Kwiatkowski, Chris Froome, Geraint Thomas, Dylan van Baarle and Pavel Sivakov to already start their altitude preparations without much travelling. Prior to joining the camp, all riders and staff were tested for the coronavirus twice, and while at the resort need to comply with various sanitary guidelines.

Kwiatkowski determined to return to Tour de France in 2020

Coronavirus: Kwiatkowski offers apartments in Poland for doctors and nurses

For the Pole, two weeks at altitude is a continuation of efforts already undertaken in confinement.

"During the lockdown, I slept in an altitude tent most of the time. This was certainly a new experience because I had never really tried it before. I mean, I had, here and there, but there was never enough time. In this situation, I had two months to do it," Kwiatkowski explained in an interview with Polish cycling website Rowery.org.

Athletes use altitude tents to simulate reduced oxygen conditions at high altitude, and thus boost production of oxygen carriers, such as red blood cells and haemoglobin. Altitude tents are permitted under World Anti-Doping Agency (WADA) rules, but are banned in some countries, including Italy and Norway.

"I didn't check before or afterwards," Kwiatkowski said when asked about his blood values. "But the feeling is different. I would normally head out to an altitude training camp in May and struggle a lot in the first few days, especially above the 1,500-metre mark. I could feel my heart-rate jump. This time, that's not been the case – perhaps due to the acclimatisation I've done at home."

'I want to be ready from August 1'

Kwiatkowski's provisional schedule includes Strade Bianche (August 1), Milano-Torino (August 5) and Milan-San Remo (August 8), as well as the Critérium du Dauphiné (August 12-16) as the last racing test ahead of the Tour de France, which is set to run from August 29-September 20.

The 2014 road race world champion says he wants to be ready from the get-go, and hopes to be in the mix for the win at both Strade Bianche and Milan-San Remo.

"In my view, the altitude camp in mid-July, just before the season starts again, will be key," he explained. "I'm here [at Isola 2000] until June 28, and then it's two weeks back home, and then back for another training camp – back for more high-intensity training, not just building foundations.

"I'll know more about my shape then. I'm optimistic: I've never struggled with racing at a high level in the early stages of the season. I want to be ready from August 1," Kwiatkowski said.

While stage races are largely absent from his schedule, the time frame resembles that of a spring Classics campaign, for which the challenge has always been peaking in late February/early March and maintaining top fitness until the end of April. Kwiatkowski sees the similarity, but insists experience is on his side.

"Being in racing shape for three months is a huge effort. You need to be careful not to peak too early, not to get to the right weight too early," he explained. "I haven't been killing myself in training too soon, as I have some experience of having done that: in the past, I'd sometimes end up with almost nothing left in the tank by the time of the Ardennes Classics."

This year, Kwiatkowski is likely to tackle the World Championships and the Classics after the Tour, hoping to hang on to top shape for as long as possible. The Worlds road race (September 27), Liège-Bastogne-Liège (October 4), the Tour of Flanders (October 18) and a debut at Paris-Roubaix (October 25) are all on the schedule, building a diverse racing schedule for October.

"We'll be racing with the same legs we have coming out of Paris. I don't think you can do much: if you blow up in the final week of the Tour, and if you're not mentally ready for more racing, then you won't have enough time to improve," Kwiatkowski stressed.

"Paris-Roubaix will be an interesting one," admitted Kwiatkowski of his first attempt at 'The Hell of the North', "but it's likely to be my last race of the year, so I'll have nothing to lose."