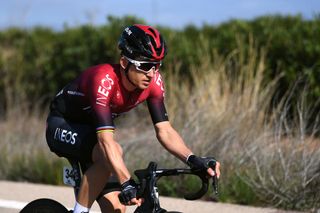 A little over half-way through 2019, when he opted to skip his home race at the the Tour de Pologne, Michał Kwiatkowski (Team Ineos) put out a bleakly-worded communique saying his season "had not been what [he] dreamed of."

In a year that concluded with no wins for the Pole, for the first time since 2011, and with a below-par ride in the Tour de France, it was easy to understand why the former World Champion was none too enthusiastic about 2019.

That's not to say the few plus points of Kwiatkowski's 2019 season should be ignored, however. A third place in Milano-Sanremo is nothing too be sniffed at, even for a former winner like Kwiatkowski.

The same goes for third overall and a spell in the leader's jersey at Paris-Nice before his teammate Egan Bernal took command of the GC. At the very least, results like these show that even in a bad year, there are still almost guaranteed to be some points when Kwiatkowski is in the mix.

Kwiatkowski: My body was yelling for recovery

It's not surprising that Kwiatkowski freewheeled down the starting straight at stage 1 of the Volta a la Comunitat Valenciana on Wednesday with a big grin on his face and a well-developed suntan from a relaxed but productive training camp in the Canaries.

Kwiatkowski is, he tells Cyclingnews, as determined as ever to hit his target races this year, and that's despite a bad training crash last December that delayed his 2020 debut by a month.

"The winter was 50-50 good and bad," Kwiatkowski said. "I've had a great January, but in December I crashed on the Cote d'Azure near Monaco, training, I went into a scooter and hurt my quadriceps.

"So there was two weeks in rehab. but at the end of the day, things got better in January and hopefully it won't make too much difference."

There was one clear consequence so far of his injury and that was having to miss the Santos Tour Down Under.

"Instead of the Down Under, I did the training camp in Gran Canaria ... and then I opted to come here, before going back to what I'd always thought I'd do this season: Algarve, Strade Bianche, Milan-Sanremo, and so on."

Kwiatkowski is cautious about what his options are of repeating his run of early season success in races in like Algarve saying "I'm always trying to be positive. You asked me about the winter and there was the good and the bad, but we'll see what Valencia and Algarve bring, and then the big priorities like Strade and Sanremo as well as the Ardennes.

"I must say, I feel like I'm on schedule. It's always hard to say exactly where I am because this is the first race of the season, so" - he says half-jokingly - "I'll be feeling the blood in my lungs here for sure in the next few days on the climbs.

"I've never done that really tough climb on Saturday either, even though for a time I was living locally over the winter round that area, it was too hard for training. In February, doing it in a race, that's going to be hard."

Looking further ahead, Kwiatkowski brushes aside any possibility of a dilemma between returning to his home race, the Tour de Pologne, which because of the Olympics shifts dates from its usual August slot to coincide with the Tour de France, and sticking to the Tour in July.

"I definitely want to do the Tour de France again," he said. "I have great experience of doing well there and then going on to win races afterwards, like in San Sebastian [2017] and Pologne [2018].

"It wasn't the greatest experience last year but 2017 and 2018 give me confidence, and I want to be good outside the Tour as well, for the Olympics."

Kwiatkowski is convinced that he can do the Tour and then, despite the time differences, go on to do the Olympic Games a week later in Tokyo.

"It depends on how you finish the Tour," he said. "They always say that it's difficult to go on to do San Sebastian, but it's possible, even after having a party in Paris to celebrate after the Tour ends.

"So I think it's mental more than anything. And in San Sebastian in 2017 and Poland in 2018 my condition was even better than it was in the Tour. It's a long way ahead, in any case, but that's what I want to keep as an objective."