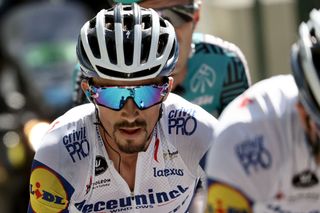 The problem with success is that it raises the bar. If he didn’t know it already, Julian Alaphilippe surely discovered as much at the Tour de France, where a stage win and three days in the maillot jaune came to be deemed as a meagre return after his outsized achievements in July of last year.

Alaphilippe’s aptitude in all manner of one-day races – as evidenced by his victories at Milan-San Remo, Strade Bianche and Flèche Wallonne last year – means that his World Championships record is also judged against a harsh scale.

A leader in the French team at each of the past three World Championships, his best result was his 8th place in Innsbruck in 2018, though he went close to the title when he attacked on the last lap in Bergen the previous year. In an online press conference on Friday evening, Alaphilippe was asked if he had drawn lessons for the Imola Worlds from his “failures” in previous editions.

Lappartient refutes that UCI is moving too slowly on rider safety

“I don’t know if they could really be called failures,” Alaphilippe said. “You don’t succeed every time. There’s only one rider who can win, so I think it’s a bit harsh to call them failures. Last year, we didn’t get a result, but I thought collectively we did a nice race, so I couldn’t consider that as a failure. Now I’m focused on Sunday and we’ll take on the lessons of the last few years in the hope that they help us. It’s another chance.”

Alaphilippe lined up in Yorkshire twelve months ago as the outright favourite for the rainbow jersey, even if his performances immediately beforehand suggested that his flame was finally beginning to gutter after a year of burning so brightly. His challenge was definitively snuffed out when he struggled with the wintry rain and cold, eventually placing a distant 28th. Rain is again forecast for Sunday afternoon in Imola, though Alaphilippe did not believe it would have quite the same deleterious impact as the day-long deluge of a year ago.

“I fear it a lot less than last year,” Alaphilippe said. “There’s a bit of rain forecast in the latter part of the day alright If that happens, the rain will make the course more dangerous difficult but it won’t have a big effect from a physical point of view.”

The precise state of Alaphilippe’s physical condition is, of course, the great unknown ahead of the big day. His stinging attack on the Col des Quatre Chemins on stage 2 of the Tour suggested that his qualities as a puncheur remain resolutely intact, but the then struggled to make a similar impact during his raids off the front in the latter part of the race. Or, as Deceuninck-QuickStep manager Patrick Lefevere put it in his column in Het Nieuwsblad: “I think I’m pushing an open door when I say that Julian was a little bit less in this year’s Tour.”

The Imola circuit, with its 5,000m of total climbing and the 14% slopes of the Gallisterna, seems tailored to a rider of Alaphilippe’s characteristics, but national coach Thomas Voeckler still insisted that his team, which also includes debutant and dangerman Guillaume Martin, were outsiders. His words were echoed by Alaphilippe.

“We’re outsiders but that doesn’t mean we don’t have ambition. The Slovenians and many others are capable of making the race hard and winning, but I think it will be a completely different race to the Tour. The Worlds is always raced differently. There are really a lot of riders who can win so it’s hard to single out a favourite,” said Alaphillipe, who leads a French team without Romain Bardet and Thibaut Pinot, crash victims at the Tour.

“During the Tour, I managed my efforts to finish tired but still motivated to continue my season with the Worlds and the Classics, and I think I’ve managed the week well. I’ve rested well, I think I’ve managed to recover for Sunday and I’m very happy with the circuit after looking at it today: it’s going to be a tough race, very demanding.”

The prospect of rain and a circuit that leaves little space for recover has led some to wonder if the winning selection could be forced before the final lap, but Alaphilippe maintained that the difficulty of the route would see riders unwilling to extend themselves too early in the afternoon.

“You can imagine a lot of different scenarios, but I think it will be condensed in the finale and the race will be decided in the final kilometres,” Alaphilippe said. “On a course as hard as that, I don’t really see a break going from distance.”

The final haul up the Gallisterna, which comes 11km from the finish, could yet see a reprise of Alaphilippe’s duel with Wout van Aert over the Poggio at Milan-San Remo. The Belgian claimed the two-up sprint on the Via Roma on that occasion and he lines up as the consensus favourite here. The decision of one Deceuninck-QuickStep rider to decline selection for the Belgian squad, however, is perhaps indicative of Alaphilippe’s intentions this Sunday.

Dries Devenyns is Alaphilippe’s most valued domestique throughout the season and Lefevere revealed in his Het Nieuwsblad column that the 37-year-old couldn’t bring himself to race against his leader in Imola. “Dries didn't want them to be able to ask him to close a gap on Julian,” wrote Lefevere, who argued that Alaphilippe could land the rainbow jersey despite misgivings about his form. “This is a one-day race and he remains a super talented guy. If everything is going well, why not?”