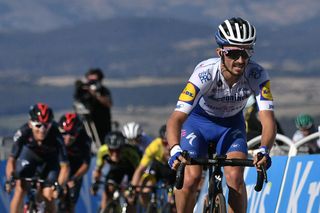 Julian Alaphilippe suggested that losing the Tour de France yellow jersey might be a blessing in disguise, as he looks ahead to the opportunities for stage victories in the second and third weeks of the 2020 race.

Alaphilippe surpassed all expectations last year when he carried the overall lead for 14 days until stage 19, and it looked like he might be in for a repeat when he won stage 2 and reacquainted himself with the maillot jaune.

However, after falling from the lead due to a time penalty for an illegal feed on stage 5, any expectations of the Frenchman challenging for the overall title evaporated in the Pyrenees at the weekend. After a brief attack on the Col de Peyresourde, he was dropped and lost 12 minutes on Saturday, and on Sunday he rode in the gruppetto and placed seventh from last.

"I never expected to repeat what I did last year. Last year was an exceptional season and an exceptional Tour de France," the Deceuninck-QuickStep rider told reporters during a rest day press conference on Monday.

"It was just an amazing feeling and a big satisfaction to win in Nice last weekend and wear the yellow jersey. It was unfortunate to lose it in that way, but in the end it’s also maybe better for me, looking at the coming weeks. Last year I finished the Tour completely exhausted, so maybe this is a better way to think about the rest of the Tour and what comes after the Tour," said Alaphilippe.

This year’s Tour, of course, is followed just a week later by the World Championships road race. Although the extremely hilly Aigle-Martigny course in Switzerland had to be abandoned due to the pandemic, the Worlds will take place in the Italian city of Imola, with the Elite men's road race on September 27 on a route that still manages to feature just under 5000 metres of elevation gain.

Alaphilippe did not want to talk about the Worlds, only describing himself as "happy it’s still on a demanding route," and preferring instead to focus on where he goes next in this Tour de France.

"The yellow jersey is over," he said, playing down the idea of switching his sights to the polka-dot jersey for the mountains classification, which he won in 2018. "I don’t know if I’ll go for it. It takes up a lot energy to do that. Stage wins are a big motivation and they remain the major objective of the team at this Tour.

"It was a really hard first week and I needed the rest day. We’ll see how my legs respond, look at which stages suit me best, and take it from there."

The second week begins with two flat stages before entering the medium mountains of the Massif Central, with a particularly gruelling stage 13 that packs in 4,400 metres of elevation gain – the highest of any stage in the Tour – before finishing on the Puy Mary. A summit finish on the Grand Colombier ends the second week before the race heads into the Alps in the final week.

"There are several stages that have caught my eye. I don’t know the Puy Mary but I’ve spoken to my teammate Rémi Cavagna, who knows it well and says it will be a really hard stage, so that’s going to be a good day to try," Alaphilippe said.

"Above all, though, it’s the Alps that I think will be best for me. I’ve reconned those stages, which is an added motivation. I’m determined to try something, but where that will be, in the end in the legs will decide."

Alaphilippe had little to say when it came to the subject of the pandemic, which is back under the spotlight given all riders are being tested for COVID-19 on the rest day. It followed complaints from a number of riders about the amount of fans on the roadside in the Pyrenees, some getting very close to the riders and some not wearing masks.

"I think it’s being pretty well managed," Alaphilippe said. "We are being tested regularly. For sure there were some people on the climbs but that’s part of the Tour. Everyone has to respect the rules, wear the mask, and the Tour continues."