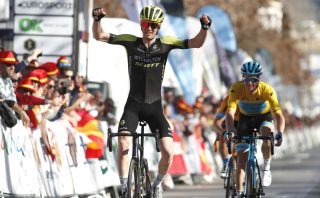 The 26-year-old moves on after five seasons with Mitchelton-Scott, where his wins included stages at the Tour de Pologne and Vuelta a Andalucía. Haig has also established himself among the most valuable mountain domestiques in the peloton in recent years and will form part of Mikel Landa's support team in seasons to come.

Haig, who finished second in Andalucía earlier this year, was an U23 national champion before moving to the road, racing on the Australian Continental circuit before joining Orica-GreenEdge as a stagiaire in 2015 and then signing up on a full-time basis the next season.

"I'm extremely excited to be joining Team Bahrain McLaren in 2021," Haig said in a team press release. "Although the team is still somewhat in its infancy, the people within the organisation possess an extraordinary amount of drive, talent and expertise which make this such an exciting opportunity to be a part of."

"After five wonderful years at Mitchelton-Scott I am ready for this new challenge and contributing to the journey of Team Bahrain McLaren."

Bahrain McLaren, which recently announced that McLaren would end its co-sponsorship next season, has undergone a makeover for 2020, with Vincenzo Nibali, Rohan Dennis and Domenico Pozzovivo leaving as the team retooled around ex-Movistar and Ineos men Landa and Wout Poels.

Rod Ellingworth also moved across from the British team, becoming team principal. He said tha Haig had an exciting future ahead of him at Bahrain McLaren.

"We want every one of our riders to push themselves and find out how good they can be," Ellingworth said. "In Jack's case, he's shown us his potential, so I see an exciting future ahead of him. But to achieve the sort of success we want for our riders, it's down to every member of the team to pull in the same direction.

"That's the sort of culture we have been building at Team Bahrain McLaren. I look forward to working with Jack and helping him achieve his personal goals."