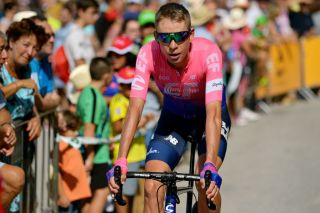 The Tour of Guangxi marks the end of a transformative season for EF Education First's Hugh Carthy. The Brit's 2019 has seen him take his first WorldTour victory – indeed, his first win in three years – at the Tour de Suisse, and a Grand Tour breakthrough, finishing 11th overall at the Giro d'Italia.

At the latter, Carthy only improved as the race went on, bagging top-five placings late in the race, going on the offensive on the Mortirolo, and steadily rising up the rankings in the final week. In Switzerland, he won the final mountain stage with a 90km solo raid.

"It's been pretty good, overall. Some big improvements made. I'm happy with how I've done, and the team are happy," he told Cyclingnews at the end of stage 5 in Guilin.

"I've enjoyed the year, and I think I've taken a step forward. The team can rely on me more. I trust them now, and they trust me. It's a nice relationship.

"And it's nice to win a race, that's what it's all about. So, I'm really happy with that. It was just the icing on the cake for the first half of the year. I was working towards a win. I was close a few times, and it was just what I needed."

But despite the improvements, the Lancastrian hasn't had it all his own way in 2019. His second Grand Tour of the year, the Vuelta a España, ended abruptly on stage 6 when he was caught up in a mass crash that put teammate Rigoberto Urán in hospital for weeks with multiple injuries.

Carthy suffered a broken left collarbone in the pileup, with the break putting him out of action for a month. After almost taking the decision to end his season there, Carthy returned to race in Italy before finishing the year off in China.

"I was hoping to do something nice in the Vuelta but that was just bad luck to crash when I did. I said after the crash that, initially, I didn't want to race again this year. I was happy to not race here and instead spend a few days at home.

"But I spoke with the team, and they said I can come to Italy, do a few races there, then come to China. I thought it'd help my recovery to have a bit of an objective. I got a bit sick before Il Lombardia, but still came here and I got this in the legs for next year."

Inevitably, as 2019 draws to a close, thoughts turn to the next campaign, or first the offseason. Carthy is forthright about what he'll get up to over the winter, saying, "If I feel like doing something, I'll do it. If I don't, I won't."

But there's an outline of an idea for 2020. Grand Tours will be on the menu, though precisely where Carthy will be looking to take his next step in the world of three-week racing is still up in the air. The climber-friendly Tokyo Olympics look a possibility too, albeit some distance into the future.

"I don't know yet. It's interesting with the Olympics next year. That'll change a lot of where the top riders go, which Grand Tours. Maybe some might go for the Giro and prepare at home for the Olympics, so we'll see what happens.

"I'm not too worried, to be honest. The team will do what's right for me and we'll work something out that works well for both of us."