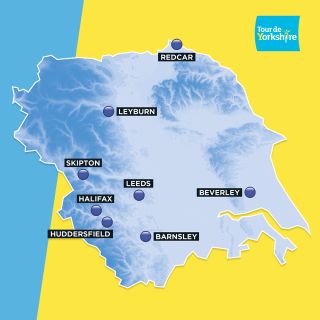 The ASO and Welcome to Yorkshire have unveiled the eight host locations for the 2020 editions of the Tour de Yorkshire and Women's Tour de Yorkshire. The races, which will be run for the sixth time next May, welcomes four towns as new start-finish hosts.

Taking place from April 30-May 3, with the women's race held on May 1-2, the 2020 Tour de Yorkshire will revisit the cities of Barnsley and Leeds as well as the towns of Beverley and Halifax.

Leeds has hosted three stage finishes in the past three years, while Barnsley has also featured on the last three editions of the race. Beverley hosted the race start in 2016 and 2018, also hosting the Para-cycling International in September. Meanwhile, Halifax appears on the race route for a third time.

The coastal town of Scarborough, which has hosted a stage finish by the sea in each edition of the race so far, will not host a stage start or finish in 2020.

The four new start-finish locations on the route are Huddersfield, Leyburn, Redcar and Skipton. Redcar, a coastal town north-east of Middlesbrough, will be the most northernly location the race has ever visited.

Back in 2014, the Tour de France passed through Huddersfield, Skipton and Leyburn, while the 2019 Road World Championships also visited the latter two towns.

"It's always exciting to unveil the host locations for the Tour de Yorkshire and this year is no exception," said Peter Dodd, commercial director of Welcome to Yorkshire.

"We're delighted Huddersfield, Leyburn, Redcar and Skipton will each be making their debuts as we're always striving to bring our race to new parts of this great county.

"The other locations have already proven themselves as more-than-worthy recipients and we cannot wait to revisit them as well."

Tour de France director Christian Prudhomme added that, "The Tour de Yorkshire is a true success story and it is now one of the best attended and most dramatic races on the cycling calendar.

"We are delighted to be working in partnership with such a great team at Welcome to Yorkshire and I know our eight start and finish locations will put on a real show in 2020."

It's unclear how the four stages – and the two stages of the women's race – will be organised, though the full routes for both will be unveiled on January 17.