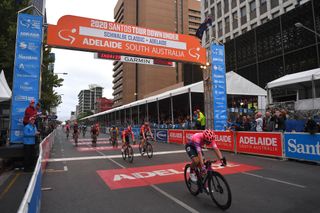 Caleb Ewan (Lotto Soudal) dominated the sprint at the Tour Down Under Schwalbe Classic Criterium on Sunday but EF Pro Cycling stood out as the best lead-out train in the race, with Kristoffer Halvorsen finishing fifth after perhaps hitting the front a little early.

EF Pro Cycling overshadowed Deceuninck-QuickStep, Cofidis and Team Ineos on the final lap of the 1.7km Adelaide circuit. They hit the front en masse and lead out the sprint until 220 metres to go, when Roger Kluge moved off their wheel to give Caleb Ewan room to accelerate away to victory.

Halvorsen kicked hard to try to go after him but faded slightly after making his effort, with Viviani, his lead-out man Simone Consonni and Jasper Philipsen (UAE Team Emirates) coming past before the line.

"The first sprint of the year was a bit of shock to the body but it was really nice, the guys did a really good job. We were the best team in the end but it was me that didn't have the timing," Halvorsen said.

"The others in front were a bit faster today but this was the first time we've raced together. Now we really believe we can get some results this week."

EF Pro Cycling hired Halvorsen after he spent two seasons at Team Ineos. He lacked full support from the British team due to their Grand Tour focus but EF Pro Cycling have worked to create a high-speed pink and blue train to help him.

EF Pro Cycling directeur sportif Tom Southam is quietly confident Halvorsen can cause an upset at the Tour Down Under against the likes of Ewan, Viviani, and Sam Bennett.

"It's the first time we've put the lead-out train together on the road and I think they're really up to the task," Southam told Cyclingnews enthusiastically.

"These guys will really properly help him out, they won't just get him to a kilometre and then be out of there. We've got guys like [Tom] Scully, Mitch [Docker], Jens [Keukeleire] and Jonas [Rutsch] the neo-pro. They'll form a really good unit. It's going to be a work in progress but there's no reason why it can’t start well.

"We're getting to know Kristoffer as a sprinter and I think there are opportunities here for him to test himself. He's only 23 and so perhaps doesn't know himself, so it'll be interesting to push him on the harder stages and see what he can do."