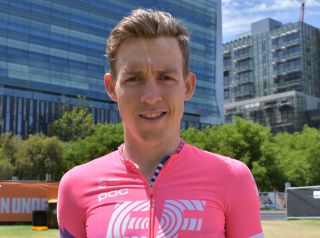 The Tour Down Under has again attracted some of the fastest finishers in the WorldTour peloton, but the first sprints of the season always throw up surprises and Kristoffer Halvorsen is keen to take some big-name scalps to show that he's also part of the wave of youth washing over the bunch.

The Norwegian was under-23 road race world champion in 2016 but struggled to emerge at an early age during two seasons at Team Sky and Team Ineos. Now 23 years old, he has moved to EF Pro Cycling for 2020, keen to find a way through in the sprints and hit the line first, starting at the Tour Down Under.

"It's a new start for me, but I feel good and I'm really looking forward to racing with the new team here at the Tour down Under. I think we have a pretty good team here to do something in the sprints, so I'm looking forward to getting stuck in. I think my form is good," Halvorsen told Cyclingnews before the EF Pro Cycling riders headed out for a 140km ride in the Adelaide Hills on Friday to study two stage finishes where Halvorsen hopes to fight for victory.

This year's Tour Down Under has an extra hilly finish on stage 3 to Paracombe on Thursday, and will be decided on Willunga Hill on stage 6 on Sunday, January 26, but the other finishes all suit Halvorsen, who balances his finishing speed with the ability to handle a rolling race profile. EF Pro Cycling consider him an Oscar Freire type of sprinter and hope he can go on to emulate the Spaniard, who won three world titles and three editions of Milan-San Remo.

"Kristoffer is a great talent, and it's up to us now to help him realise that talent," team manager Jonathan Vaughters said when announcing Halvorsen's arrival at EF Pro Cycling.

"As an organisation, we're only missing one Monument on the trophy mantle, and that's Milan-San Remo. Halvorsen is our ticket to getting that last one over the fireplace."

Halvorsen is hoping EF Pro Cycling can give him the opportunities to contest the sprints, and the support and lead out that can make the difference between winning and losing.

"The main reason I moved from Team Ineos to EF Pro Cycling was to focus more on the sprints," Halvorsen explained.

"At Team Ineos, I had opportunities but there are a lot of GC guys there, too, which logically pulls the whole team in a certain direction. Here at EF Pro Cycling there's more focus and more opportunities in the sprints, and we're also focused on sprinting even in training."

Halvorsen has a quiet respect for his elders but has the innate hunger needed to win sprints. He refused to pull on the brakes when he made his debut with Team Sky at the pre-Tour Down Under criterium in 2018. The subsequent crash left him with a fractured wrist but respect from his rivals.

"I've been to the Tour Down Under before, so I think I know what I need to do. I think I've also stepped up this winter, so I hope to be up there in the sprints. I think the racing will be hard before the sprints and that can help me," he said.

Remember his name next week.