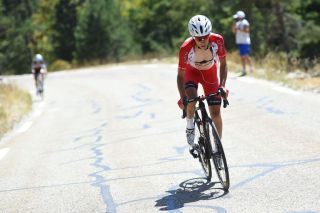 Guillaume Martin (Cofidis) has shown the kind of form over the past week that suggests that the 27-year-old Frenchman may be able to improve upon his 12th place at last year's Tour de France, and possibly even break into the top 10. Fourth on the final stage of the Tour de l'Ain on Sunday, following his third place at the Mont Ventoux Dénivelé Challenge last week, suggests that he'll be a rider to watch at this week's Critérium du Dauphiné.

Martin was able to keep pace with some of the best riders in the world on the final climb of the Grand Colombier on the final stage of the Tour de l'Ain, only losing contact with stage winner – and overall winner – Primoz Roglic (Jumbo-Visma) and 2019 Tour de France champion Egan Bernal (Team Ineos) in the final kilometre, while another Tour favourite, Arkéa-Samsic's Nairo Quintana, finished just two seconds in front of him in third.

"I'm very pleased with my results, and proud to have been able to have got to the point where I can compete with the kind of riders who will contest overall victory at the Tour de France," Martin said on his team's website.

Jesús Herrada finished 13th on the final stage of the Tour de l'Ain, and the two Cofidis riders filled the eighth and ninth spots overall, with Martin almost a minute a head of his Spanish teammate.

Guillaume Martin: It's time for Cofidis to win a Tour de France stage

At last week's Mont Ventoux Dénivelé Challenge – which was won by Herrada in 2019 – Martin took third, just under a minute down on winner Aleksandr Vlasov (Astana) and 40 seconds behind runner-up Richie Porte (Trek-Segafredo).

Both Martin and Herrada will form part of Cofidis' Tour de France squad – which also has sprint ambitions thanks to Elia Viviani – while Martin now heads to the upcoming Critérium du Dauphiné, which starts in Clermont Ferrand on Wednesday, as an in-form rider who could come away with a stage win and a high overall finish.

"After weeks of training at altitude, I knew that I had reached a new level, but without knowing what level that placed me at in relation to the others. The whole team – the riders and staff – worked really well together at the race, and we'll approach the Critérium du Dauphiné with a similar motivation and determination," said Martin, who only joined WorldTour squad Cofidis at the start of this season following four years with Belgian ProTeam Wanty-Gobert.

"Yesterday [Saturday], he had to change his bike after a fall at the start of the stage, and he then hung on until the end. And today, he showed his good form by staying in contact with the best until the end.

"His performance was very encouraging," Deloeuil continued. "There were only Tour de France podium contenders ahead of him. At the same time, Jesús has been in great form during this race, and also deserves his place in the top 10."