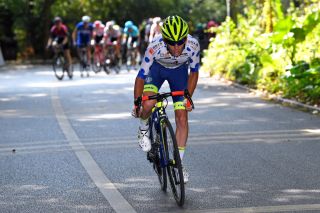 Guillaume Martin, on the attack in 2019, will race for Cofidis in 2020 (Image credit: Getty Images Sport)

Like many in the peloton, Guillaume Martin is drawing a long season to a close at the Tour of Guangxi. At the start of stage 3 in Nanning, he reflected on the 2019 season, his last with Wanty-Groupe Gobert, and outlined a broad plan for 2020.

Martin has been a consistent performer throughout the year, despite racking up 87 race days and counting, a number that will rank him in the top ten of the pro peloton once Guangxi is done. But that will change at his new team, Cofidis, he says.

"I think next year I will target some races instead of trying to be regular all season," he told Cyclingnews. "So, I will probably race a little bit less in order to arrive for example at the Tour de France really fresh and in top shape, so that I can maybe win a stage.

The argument seems to arise every summer ­over which is the more valuable – a top ten placing in Paris, or a stage victory somewhere along the way? For Martin, who finished 12th at the 2019 Tour, his third outing at the race, the answer is quite clear.

"If I can do both, then for sure that's really good," he said. "If I can win a stage then it's already really good and if I do top ten then it's not bad. But we are talking about a thing that will happen in a lot of months, so we have time."


The 27-year-old is moving on from the team he turned professional with, and after four years at the Belgian squad, he has nothing but good things to say about them and their role in his development so far.

"It's the end of a chapter of my cycling career. It was my first team – I spent four years here, four good years. I really enjoyed the times and I'm thankful to Wanty for what they've brought me.

"They always believed in me and they built me into the leader of a team. Ok, now it's a new chapter as I said. I want to do new races, have new responsibilities – even bigger ones – and that's why I wanted to move."

He's happy with how his long 2019 campaign has gone too, with 12 top five placings along the way, including a victory on the summit finish of Mount Etna at the Giro di Sicilia.

"I've been present in almost all the races I have participated in," he said. "From January to October now. So, I will finish the season with 90 days of racing and a lot of good results.

"Ok, there's only one win, maybe I hoped for more – we'll see at the end of the week. But yeah, I was really regular all season. I don't count the top tens I have but I'm really happy with the season."

Martin does have one final chance to add to his 2019 win tally, on Sunday's stage in Guangxi. Stage 4 culminates in a hilltop finish and 3.5-kilometre climb to the Nongla Scenic Area north of Nanning.

The stage has been decisive in the race for the first two editions, and with two flat stages to follow, should be once again this time round. Martin was active on the front of the peloton on the final climb of stage 3, going on the attack before the eventual sprint finish in Nanning, and the move could bode well for Sunday.

"I will try to do a good GC, for sure. On paper it will all be decided tomorrow, so I think we will know more then. I think that will be the important day."