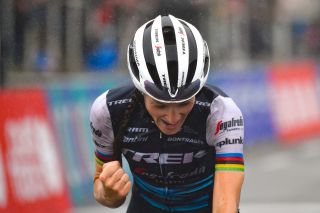 Lizzie Deignan (Trek-Segafredo) has become the first woman to win the GP de Plouay-Lorient Agglomeration Trophee WNT on three occasions after she was fastest to the line in a two-rider, rain-soaked sprint on Tuesday in Plouay, France. Deignan went into the race as a favourite, but after a series of setbacks and crashes with in the team, she said this victory offered a much needed morale boost.

“Obviously I’m delighted, it’s been a difficult season for everybody so far and we’ve had a lot of bad luck in the first few races. It’s been clear to me that we’ve had the strongest team in all the races and finally the luck was on our side," Deignan said in a post-race interview.

Trek-Segafredo had a strong start to the season in Australia with a the overall victory at the Women’s Tour Down Under with Ruth Winder along with top-10 performances all the way through to the opening weekend in Belgium in early March before the season shut down due to the coronavirus pandemic.

Deignan also had strong performances in support of her teammates but didn’t finish Clasica Femenina Navarra and Giro dell’Emilia. She also crashed and sustained contusions at Strade Bianche but finished in 37th. In addition, the team had six of their bikes stolen overnight ahead of that Italian event.

Deignan’s victory at GP de Plouay signifies the wheel of fortune has turned in favour of Trek-Segafredo as the team begins the French block of racing that continues at La Course by Le Tour de France on Saturday.

“This was awesome, we really needed this for the mental part," said Trek-Segafredo director Ina Teutenberg. "We had a plan that we had to readjust because of how the race went. The girls really went for it and tried to take control of the race."

Organisers made significant changes to the circuit compared to previous years. The peloton raced a 44km opening circuit followed by four laps of a 13km loop around the quaint village of Plouay. The shorter circuits included three climbs with the last climb just 2km from the finish line.

Deignan bridged across to an attack from compatriot Lizzy Banks (Equipe Paule Ka) with 32 kilometers to go. The pair worked well together to stay ahead of a chase group that included Van Vleuten, along with Deignan’s teammate Longo Borghini. Deignan sprinted to victory ahead of Banks as the pair crossed the line over a minute ahead of the chase-group sprint, won by Ciara Consonni (Valcar-Travel & Service).

"We had the numbers and used that advantage early," Deignan said. "I attacked off the back of some attacks from the other girls, and I was able to get some space and I knew the rest of the team was backing me up behind, so all I had to do was put my head down and try to get to the finish line first, and we did, so I’m really happy.

"Plouay is a really nice race and I always seem to do well here. The rain came which was an extra bonus for me, finally no more sweating in the heat for me! I’m really, really happy and grateful to the whole team for their effort."

Teutenberg expressed her approval of the team’s performance that led to Deignan’s victory and acknowledged its importance in lifting their overall morale heading into the next block of races, where Deignan will focus on the Giro Rosa and the Tour of Flanders.

"It was great that Lizzie could ride this into the finish with Lizzy Banks and take the win," Teutenberg said. "It was really nice to win after the bad luck with crashes in the last two races, so it’s great for the morale of the team."