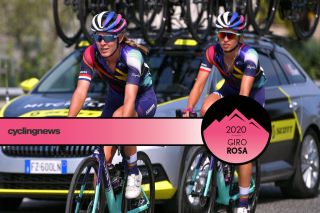 Canyon-SRAM achieved their best stage placing in this year’s Giro Rosa on stage 6 as Hannah Barnes finished runner-up to Marianne Vos (CCC-Liv) in a closely contested sprint. With team leader Katarzyna Niewiadoma second in the general classification ahead of the last three stages, the team focus now turns to defending this position.

Barnes thanked her teammates for their support in the final, leading her out for the sprint.

“It was pretty technical, and we all got together with 10km to go. First, we wanted to make sure we kept Kasia safe until 3km to go. After that, Alena did a great lead-out, she did over 1km on the front. Then Elena came through, they set me up really well," the Briton said.

On the final kilometre, Barnes was on the wrong side of the final turn but could come back from that to contest the sprint.

Teniel Campbell: I'm here for the experience in my first Giro Rosa

Giro Rosa hits back at complaints about no live television coverage

“It was a sweeping left-hand turn, unfortunately I was on the right-hand side of the road which wasn’t ideal”, she explained. “I probably started my sprint at 220 metres to go, using some speed coming from the back to kick, and could almost hold it to the line. I haven’t had the chance to go for many sprints lately, so it was good to nearly have gotten a win.”

Having reached the 3km mark safely, Niewiadoma was rooting for her teammate in the sprint. The Polish climber pointed out that Barnes is more than capable of mixing it up with the best, but that her teammate sometimes doubted herself too much.

“She is so fast, she just needs to believe in herself," Niewiadoma said. “I was so happy to see her going for it without any doubt. She did an amazing sprint and did not lose to Vos by much, that was very cool to see.”

Since an 11th place at her debut in 2014, Niewiadoma has finished in the overall top-10 of the Giro Rosa for five consecutive years, placing fifth in 2015 and 2019. This year could see her finish on the podium for the first time.

“I am feeling good. And with every passing day, we understand each other more, making the racing easier. We have three quite difficult stages, but we will take it day by day and see what happens”, Niewiadoma was cautious about their chances.

Barnes was similarly reserved but pointed out an important aspect of a long stage race. Although riders spend a lot of time together on the bike, they spend even more time together off the bike, and having a good atmosphere is conducive to in-race success.

“It gets pretty hard now, our main priority is to keep Kasia [Niewiadoma] safe and in a good GC position”, Barnes said. “And we want to have some fun, that has been the secret to this Giro so far, just having fun off the bike, and that translates onto the bike as well.”