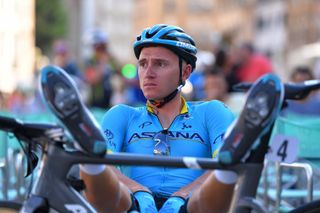 Astana have announced the re-signing of 23-year-old Yevgeniy Gidich, who will spend a third year with the Kazakh WorldTour team following a successful past two seasons.

Gidich joined Astana in 2018 from Continental feeder team Vino-Astana Motors. He finished third overall and was the best young rider at the Tour of Croatia in April of his first season with the WorldTour team, and then won a stage in Croatia earlier this month – at the rebranded CRO Race, with its new October calendar slot – having already won the Asian Cycling Championships road race in Gazelkent, Uzbekistan, earlier this season.

"I've spent two very interesting and useful years at Astana," Gidich said in a press release. "It was a huge and very valuable experience that I want to use in the future. Not everything turned out as I expected this season, but still, there were a few bright moments, and I'm happy about it.

"I fondly remember the victory with the Kazakhstan national team at the Asian Cycling Championships, and it was very nice to finish the season with a stage win at the CRO Race. In the upcoming season, I'm looking forward to trying to get some more good results and victories," he said.

"During his first two years on our team, Yevgeniy had some ups and downs and not everything went perfectly for him, but for such a young rider, that's normal, as he is still looking for his way in professional cycling," said Astana general manager Alexandr Vinokourov.

"We know his potential, and we believe that in the future he has a chance to become a strong professional rider. Yevgeniy really impressed us with the way he won the Asian Championships and with the way he performed in this end of the season, so I'm sure he's ready for more in the upcoming years," he said.