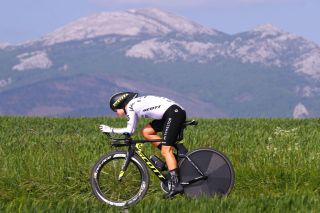 Georgia Williams will head into her fourth consecutive season with the Mitchelton-Scott team having signed a one-year extension for 2020. The New Zealand time trial champion said she wasn't pleased with her overall season but is hoping to show stronger performances next year.

Spratt focused on Women's Tour Down Under defence

Williams re-signs with Mitchelton-Scott for 2019

"I was super happy to sign, especially after not having such a good year, you're always nervous about what the management and staff are thinking, so I'm super grateful to them for supporting me for another year," Williams said.

Williams won the national time trial title and placed seventh in the road race in January. Although she played a support role for her Mitchelton-Scott team during a few of the Classics and summer stage races, she wasn't herself able to grab another podium appearance.

"I had a bit of a rough season, but I'm looking forward to putting that behind me, refocusing and sort of proving myself and making up for my not-so-good year," Williams said.

Team director Martin Vestby acknowledged Williams' setbacks during 2019 but believes she has the potential to improve on her climbing and that she will be valuable in the Classics.

"Georgia has had quite a troubled season this season, but we still see the potential in her climbing ability and her role as a strong domestique in some of the harder races," he said. "We see the capacity and the talent is there; it's just about getting her in the right place and having a season without setbacks."

Williams will aim to defend her title in the time trial at the New Zealand championships in January, and aim for an improvement on her road race result before heading to Europe in the spring.

"Winning the TT and road race at nationals would be cool and in the European races I’d like to be a good supporter in the Ardennes classics," she said.

The riders for both the men's and women's team have already had an end-of-season training camp where they could meet each other before getting started in 2020.

"After meeting the new riders during the training camp, it's super exciting. They all seem really nice and it will be super fun racing with different riders, teaching them and learning from them," said Williams.