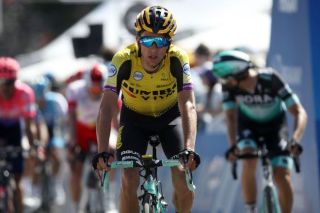 Williams re-signs with Mitchelton-Scott for 2019

Cycling New Zealand have announced their squads for the 2019 UCI Road World Championships in Yorkshire, UK, which run from September 22-29, and have selected George Bennett (Jumbo-Visma) to lead the elite men's squad, while Georgia Williams (Mitchelton-Scott) heads up the elite women's team.

Bennett is currently racing at the Vuelta a Espana, alongside two other members of the four-man squad for the Worlds: Paddy Bevin (CCC Team) and Mitchelton-Scott's Dion Smith. EF Education First's Tom Scully completes the team for the road race, while Bevin and Scully will also compete in the individual time trial.

Williams will take part in Saturday's GP de Plouay-Lorient Agglomération Trophée WNT for her Mitchelton-Scott team, and in September will lead a New Zealand elite women's team for the road race made up of Ella Harris (Canyon-SRAM) and Mikayla Harvey (Bigla), with Williams and Harvey also taking part in the time trial.

"It's a strong group of professional riders who will line-up for New Zealand in Yorkshire," Cycling New Zealand high performance director Martin Barras said in a press release. "We don't have the ranking points to allow for a full team, but this is one of the stronger teams of riders, both numerically and in quality of their performances this year.

"It's particularly pleasing that we are developing depth in the women's ranks in terms of young riders who have produced competitive performances for WorldTour teams in the cut-and-thrust of tough racing in Europe, which is the hot-bed of the sport," he said.