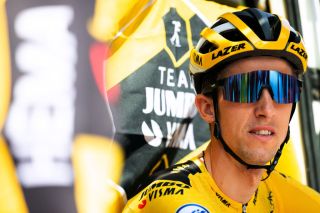 George Bennett (Jumbo-Visma) at the Tour Down Under (Image credit: Getty Images Sport)

George Bennett (Jumbo-Visma) showed his intentions to fight for overall victory at the Tour Down Under, sneaking away from the peloton to take a one-second time bonus during stage 2.

In the process, the New Zealander confirmed himself as a dark horse for this year's race, in the shadows of defending champion Daryl Impey (Mitchelton-Scott) and expected favourites Richie Porte (Trek-Segafredo) and Rohan Dennis (Team Ineos).

Bennett has ridden the Tour Down Under every year since 2013, apart from 2017, travelling across from his winter home in New Zealand to try to take on his Australians rivals during the southern hemisphere sun.

Now 29, with overall victory at the 2017 Tour of California and other stage race results confirming his talents and his protected status at Jumbo-Visma assured, Bennett is leading the Dutch team at the Tour Down Under.

Caleb Ewan wins stage 2 of the Tour Down Under

"I'm always pretty close, every year I go pretty good on the first uphill finish but then Willunga Hill I just mess it up big time," Bennett told Cyclingnews as the first decisive uphill finish to Paracombe on stage 3 neared.

"Last year on Corkscrew Hill I was first over the top but Willunga Hill is always a problem. I need to work that out and if I do that, I know I can be competitive. The truth is Paracombe is three-minute effort and Willunga Hill is a seven-minute effort. That's not really my kind of thing. But I've still got a good team around me, so we'll see what we can do."

Jumbo-Visma have confirmed that Bennett will lead the Dutch WorldTour team in the Giro d'Italia as Tom Dumoulin, Primož Roglič and Steven Kruijswijk focus on challenging Team Ineos at the Tour de France. Bennett also has his eye on the hilly Tokyo Olympic road race and so knows he has to carefully build his early-season form so he can be at his best in May and then again in early July.

"I've done a slightly different approach this year. I've been doing 20-hour weeks on the bike, a bit more intensely than other times, but I've been saving the really long, intense stuff for February, because I need to time my run-in to the Giro d'Italia just right," Bennett explained.

"If I do the big 30-hour weeks like some Aussie guys have probably done, then it'll be hard to get to June in good nick. But that doesn’t mean I can’t be good here. I don't put as much emphasis on it as the Australia guys do but I can still be good on 20-hour weeks."

The Tour Down Under is often decided on time bonuses but the added uphill finish on Paracombe, lower temperatures and the risk of strong winds later in the week, have changed many people's predictions, including Bennett's.

"I think it will be a harder race because of the route but also because we've got a way better field," Bennett said.

"Just look at the Mitchelton-Scott team. They came here with Daryl Impey, Simon Yates and Lucas Hamilton. That's three guys who can win it from one team. Then there's Nathan Haas after his move to Cofidis, while Jay McCarthy of Bora-Hansgrohe is always good at this race, there are so, many guys who can win.

"But that's the thing about January, there are probably 20 guys in the hunt and ten will be good but ten will be bad, you just never really know how good you'll go in the big moments. That's what makes it frustrating to race but in another way it also makes it fun."