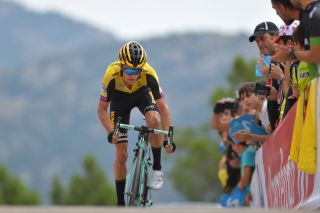 George Bennett (Jumbo-Visma) went under the knife three weeks ago in a bid to finally end a long-suffering condition that has held back his cycling career. The New Zealand rider has been riding with side stitch issues for several years and has been diagnosed with slipping rib syndrome.

The condition means that whenever Bennett pushes himself in racing he is often forced to back off due to a stabbing-like pain in his chest. At the recent Rouleur Classic in London, where the Jumbo-Visma rider showcased bike storage brand Velohawk, Bennett showed off the scars from his recent surgery, with two long sets of stitches under his rib cage.

"I had a big operation a couple of weeks ago and I hope that will help. I've had the side stitch for ages and it slowed me down a lot this year," he told Cyclingnews. "Every time I go hard I get this stabbing pain in my side. The surgery is pretty drastic measures but I've essentially had three ribs removed. That makes it sound worse than it is but each one was around 8cm long and made up of cartilage."

Bennett was discharged from the hospital the day after his surgery but he has not yet regained the health needed to jump back on the bike. However, the 29-year-old is hopeful that he will return to training in the coming weeks.

"I've had a couple of operations before, some exploratory work all hoping to fix the stitch but we're optimistic that we've now found the fix. I've been optimistic a few times and had surgery before but it's not worked but I almost think that I can ride a bike in a week or so."

The decision to go under the knife was not one Bennett made lightly.

"For me, I love cycling and it's an easy job for me. I don't struggle to find the passion for it but it's not sustainable when every time you go hard you feel a knife in your stomach.

"We sat down, talked with the family and my girlfriend, and decided that I'm not halfway through my career and that my best years are still ahead of me. I want to be able to make the most of it. If this works it will open up a lot more doors for me. I back off in training not just racing because of this, so we'll see how this goes."

Fighting for chances in 2020

Assuming Bennett can return to training in the next few weeks, the Kiwi has an important off-season ahead of him. The 2019 campaign was far from a disaster for Bennett, with key super-domestique roles for in both the Tour de France and the Vuelta a España.

He was instrumental in setting up third place for his team at the Tour and battled through illness at the Vuelta to cement his place as one of the best riders on the team. However, the respected all-rounder failed to win a race, with his best individual performance coming at the Tour of California, where he finished just off the podium in fourth place.

With Primož Roglič winning the Vuelta, Steven Kruijswijk claiming third in the Tour de France and Tom Dumoulin joining from Team Sunweb during the winter, Bennett understands that his options might be limited next season.

However, if his surgery is a success then he might reach the form that carried him to eighth overall at the 2018 Giro d'Italia. That said, opportunities in Grand Tours will be limited and with the Tour of California off the calendar, he may need to rejig his programme if he is to find his own chances.

"The loss of California throws a spanner in the works and with the team we have now it's not up to me," Bennett said when asked about his targets for next year. "The team will prioritize, as they should with Tom, Primož and Steven, and I don't see myself as having those opportunities next year.

"Maybe Tour Down Under I will, but I have to adapt and if I want a chance on this team now I need to target those races where Steve, Primož and Tom aren't racing. I won't get a shot at a Grand Tour. I know that. They deserve that, and I'm a fan of the best guys getting the best support.

"I feel like I left this year a bit empty-handed. It wasn't bad but I've been frustrated at times. That might be an exaggeration but at the Tour, for example, I had a really good level and it was great to be part of a team that got third, but there's still no results chalked up to my name.

"It's the same at the Vuelta. I was sick, crashed a few times but it was still nice to be part of a team that won. That was amazing but I left without having my own breakthrough."

Chances may be hard to come by in 2020, but if Bennett's surgery goes as planned then it represents a breakthrough in itself.

Bennett later took to Twitter to post a response to the story, making light of his operation.

Just to get out in front of this, it was loose cartilage taken out...To prevent everyone asking the same two questions here are the answers A) roughly a hundred grams B) no I can’t... https://t.co/QfE72ogwzVNovember 4, 2019