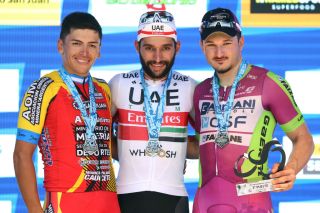 Fernando Gaviria on the podium on stage 2 of the Vuelta a San Juan (Image credit: Getty Images)

Fernando Gaviria punched the air twice and then hammered on his handlebars for good measure as silver ticker tape fluttered about the finishing straight in Pocito on stage 2 of the Vuelta a San Juan. For a sprinter, a win always tastes like a win, but a victory this early in a new campaign comes seasoned with relief at a winter well spent.

Gaviria’s debut campaign at UAE Team Emirates yielded six wins but, all told, it felt somewhat subpar, coloured by the knee injury that forced him to miss the Tour de France. He finished last season on an upbeat note in Guangxi, however, and his striking turn of speed here gave further reason for confidence.

"I can’t deny that I’m in good form," Gaviria told reporters when he arrived in the press room after the stage. "Since the team training camp in December, I have been watching my diet and doing specific work in training. I’m in good condition and I hope to continue that way until the Classics."

Dating back to when a teenage Gaviria unfurled two crisp sprints to beat Mark Cavendish on the Tour de San Luis back in 2015, he has made a habit of racking up early wins on Argentinian roads. He has picked up stage wins in each of the past four editions of the Vuelta San Juan, and his victory in the shadow of the Estadio Bicentenario in Pocito was his third on this very finishing straight in as many years.

Gaviria’s supporting cast has been boosted for 2020 with the arrival of Max Richeze, who had previously spent three years as his lead-out man at QuickStep. Richeze has carved out a reputation as a master of the art, but Gaviria had to do without his services in the finale in Pocito after the Argentinian was caught up in a crash with 13km remaining. No matter, his familiarity with the finale in Pocito helped to mitigate for the absence of his lead-out man.

"I’ll win a lot more with him than without him," Gaviria said of Richeze. "It’s not a secret that Max is a guide for me in the sprints. He had a problem today, but we were able to get around it well.

"Brandon [McNulty] and Oli [Troia] helped me. I went to Peter Sagan's wheel and had Alvaro Hodeg to deal with at my side. I had them under control. When I decided to start, I had the power I needed to reach the line."

Gaviria beat Nicolas Naranjo (Agrupacion Virgen De Fatima) and Marco Benfatto (Bardiani-CSF Faizane) to the line, while Sagan had to settle for 5th and Hodeg came home in 10th. His victory was enough to put him in the white jersey of race leader ahead of Tuesday’s time trial, though he fully expects to lose it to one of the specialists lined up 10 seconds behind him on the general classification.

His prospects of holding the jersey might have been slightly better had the commissaires not intervened to award the same time to Remco Evenepoel (Deceuninck-QuickStep) and other general classification contenders who came down in a crash with 3.2km left on stage 1, but Gaviria voiced his support for the jury’s decision.

"I think it was a sensible decision," he said. "They crashed 3.2 or 3.4km from the finish. It would have been unfair to deny the riders who are looking to ride for GC their chance, and now they’ll all get to go for it in the time trial and at Alto Colorado."