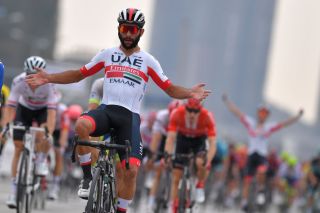 Fernando Gaviria heads into his second season with UAE Team Emirates with a firm focus on the spring Classics. The Colombian has put a tough, injury-hit 2019 campaign behind him to start afresh in 2020, and the likes of Milan-San Remo and Paris-Roubaix are high on his mind as he heads into his fifth pro season.

The Colombian will be reunited with ex-lead out man and close friend Maximiliano Richeze this year, and the pair will begin their seasons at the Vuelta a San Juan. After then heading to Colombia and the UAE, San Remo will be Gaviria's main early-season goal.

"[The goal] is to win as many races as possible and to be in good condition for every race the team needs me," Gaviria told AS of his 2020 campaign. "The dream is to win a Monument.

"The one I like most is Paris-Roubaix. This year I was about to race it but on the day of the race I woke up with a fever and the team manager didn't let me race. I still don't know the race so this year will be too soon to try to win."

Gaviria certainly has aptitude on the cobbles, taking top ten placings at Gent-Wevelgem and Dwars door Vlaanderen in the past, while his one-two punch with Alexander Kristoff at the latter last year saw the Norwegian sprint to victory.

Milan-San Remo is where the 25-year-old has come closest to glory though. In his debut at the race in 2016, Gaviria looked a favourite in the final sprint until a touch of wheels with Peter Sagan brought him down. The following year he finished fifth, five seconds down on winner Michał Kwiatkowski.

"Also, there's the first Classic, Milan-San Remo, a very nice race because it's the longest of the year," he said. "It's difficult and is a good race for sprinters. Right now, it's my main objective. I have come close to winning and we will work to be good on that day."

2020 is also likely to see Gaviria return to the Tour de France after a year away. He was a possibility to ride the race last year after being forced to abandon the Giro d'Italia a week in due to a knee injury. However, he didn't make it, and would not race again until August's Tour de Pologne.

Gaviria eventually recovered to ride the Vuelta a España and then win two stages at the season-ending Tour of Guangxi, but taken as a whole 2019 is a year that he wants to put behind him.

"2019 was a bit difficult due to the change of equipment and feelings," he said. " The knee injury was one of the causes of the bad year. It was hard for me to recover; I had almost three months without riding a bike.

"It was hard for me to get the form; some days I felt very good, others very bad. But now it is over, and we think about 2020. This year I learned that I have to be very careful with my body – don't overdo the workouts, the food.

"For now, we have organised the calendar for the start of the season. I start in San Juan and then will be focussed on the Classics. Then we will make more decisions. However, I think I'll be at the Tour. I don't have it as a target yet because there are still seven months to go."