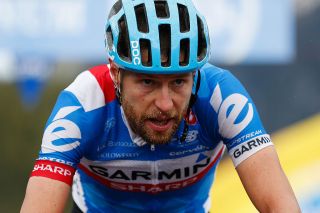 Part 1 of this special podcast series told the story of how the 2014 Garmin-Sharp team were decimated by a crash in the opening team time trial at the Giro d'Italia. Now Nathan Haas and guests Ryder Hesjedal, Fabian Wegmann and Dylan Van Baarle go back over Garmin-Sharp’s second week at the 2014 Giro d’Italia.

The team lost Dan Martin on the opening day crash and battled through a tough first week that included near continuous bad weather. They arrived at the start of stage 8 in Foligno - where this podcast picks up their story - with Hesjedal picking up an important top-ten as he looked to move back up in the GC and aim for stage wins. Haas was 12th on stage 10 after Tyler Farrar crashed, while Hesjedal came up with another top-ten the following day. Wegmann suffered a brutal crash and was forced to abandon on stage 11 to Savona.

The episode is again hosted by Haas. In the first part podcast from Peloton Brief, available here, Haas talks to fellow squad members Dan Martin, Hesjedal and Farrar about the opening stages of the 2014 Giro d’Italia and how the team battled through after their disastrous start and crash in the opening team time trial in Belfast.

The riders faced up to arguably the biggest challenges of their careers but now look back at the time with fond memories.