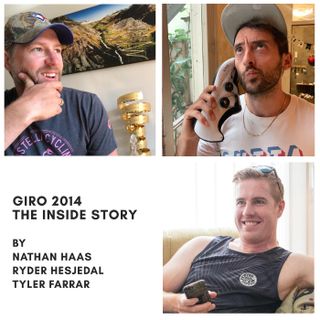 Garmin-Sharp headed into the 2014 Giro d’Italia confident of a strong result. They arrived with a stellar team that included the 2012 winner Ryder Hesjedal, fellow all-rounder Dan Martin and sprinter Tyler Farrar.

But on the opening stage in Belfast, disaster struck when Martin hit a drain covering during the team time trial. His subsequent fall ended his race and took down three others on his team with Koldo Fernandez also forced to quit through injury. It’s hard to imagine a worse collective start in recent Grand Tour history.

In this first part podcast from Peloton Brief, Nathan Haas, who was also part of the team talks to fellow squad members Martin, Hesjedal and Farrar about the 2014 Giro d’Italia and how the team battled through after their disastrous start. Through terrible weather and mountainous terrain, the riders faced up to arguably the biggest challenges of their careers.

“If you ask me it was the most miserable race of my whole life but that kind of shared suffering, I feel like I bonded with you guys, and was grinding things out day after day. That brought us together,” Farrar says.