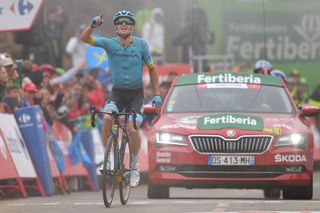 It’s finally arrived. At 34, Jakob Fuglsang (Astana) netted his first ever Grand Tour stage win in the Vuelta a España, soloing to the line in La Cubilla for a spectacular mountain-top victory.

In the same year that he won Liege-Bastogne-Liege as well as the Criterium du Dauphine, Fuglsang has now continued what the Dane described as his best season ever with a win in the same Grand Tour, curiously enough, where he has had his only day in the leader's jersey, back in the Vuelta a España in 2011.

Astana put on a superb display of team tactics, first getting Luis León Sanchez and Fuglsang in the break, then having Sánchez attack to soften up the opposition. Finally, Fuglsang went for it, dropping Gianluca Brambillla (Trek-Segafredo) to go clear.

For Fuglsang, winning in the Vuelta will surely helped him to put the memories of his difficult Tour de France, which he abandoned injured, behind him and boost his hopes, too, for a top result in Yorkshire's upcoming UCI Road World Championships.

"It feels great finally to get this Grand Tour  stage, because it's  one thing have a goal another to fulfil it," Fuglsang said.

"I came to this Vuelta mainly to help the  team, of course, but my personal objectives were a stage win and to build on my shape for the last part of the season."

As for how he won the stage, Fuglsang said he and Sanchez were aware the last seven kilometres were the easiest part of the stage, so with 10 kilometres to go, Sanchez went for it.

"He made a good, long acceleration, then when I saw the others were lacking energy and Brambilla went, I went with him and kept the move going," Fuglsang said.

"Tao [Geoghegan Hart] made a big effort to get close, but I went for it just as he was closing the gap. Luckily, I got rid of Brambila and then it was just a question of getting to the finish line."

As for the world championships, Fuglsang said that he has a good chance of at least "having a shot at it".

"There's been lots of talk about how difficult the course is, so there are a lot of questions. It can also be difficult weather. It could be a nasty day, and for that reason I feel I can maybe do something," he argued.

"I haven't done anything in the world championships up to now, maybe because I've never really had it as a goal and not prepared for it 100 percent, because the course hasn't been one that suits me. Maybe it's not such a good course for me this year, either, but I can have a shot."

The Worlds are still more than a couple of weeks away, but, for now, after some near misses in the Giro d'Italia and Tour de France, Fuglsang can celebrate taking his first-ever Grand Tour stage win.

"I'm very happy to show that this isn't just a good spring. I've been consistent enough to come back after a Tour that was, let's say, disappointing," he said. "And getting that first Grand Tour stage is something special, too."