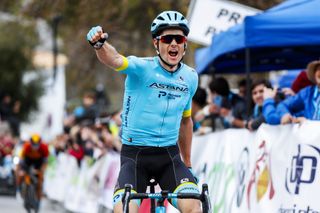 After his early season was tainted by unactionable rumours of meetings with banned doping doctor Michele Ferrari, Jakob Fuglsang answered his anonymous accusers with his legs at the Vuelta a Andalucia Ruta del Sol on Wednesday, putting in a stinging surge to trounce Bahrain McLaren's Mikel Landa in a two-man uphill sprint.

The Danish rider bridged across to Landa on the category 1 Puerto de las Palomas, which topped out with 7km to go and the pair built a lead of nearly a minute that was halved by third-placed Dylan Teuns (Bahrain McLaren) on the line. Fuglsang was awarded a six-second gap to Landa to take the first leader's jersey of the race.

"I am really happy to take the win," Fuglsang said. "It is always nice to start the season with a win and I like Vuelta a Andalucía. The team did an amazing job and as Landa attacked we knew we couldn't wait so I followed him and on the last meters I just went.

"The stage was not easy with all that climbing and luckily, it did not start to rain. It will be difficult to defend the jersey as we have just 6 riders here but of course we will do our best. I want to thank my whole team for their support, this victory means a lot to me, I was really motivated to achieve a good result today."

Fuglsang won the overall Ruta del Sol last season without having taken a stage victory. He then went on to podium in Tirreno-Adriatico before winning Liège-Bastogne-Liège and the Critérium du Dauphiné and a stage in the Vuelta a España.

He was forced to fend off rumours of his involvement with Ferrari earlier this month when details of a confidential intelligence report were leaked to Danish and Norwegian news outlets. The Cycling Anti-Doping Foundation confirmed that it hired intelligence provider Sportradar to conduct additional research for a secret dossier after it "received information in relation to alleged potential anti-doping rule violations".

The report alleged contact between Fuglsang and Ferrari, but both the rider, Ferrari and the Astana team all denied the allegations and the intelligence report was not forwarded on to the UCI's Disciplinary Commission for any anti-doping rule infractions.

"I contest that I have met with Dr Ferrari," Fuglsang said on Instagram this month. "I am not aware of any report and I can confirm no procedure has even been opened by competent anti-doping authorities against me. Accordingly, I have no case to answer. I am extremely concerned that such rumours could be spread out in the press."

The CADF said it would investigate how the report was leaked to the media.

With that case now behind him, Fuglsang and directeur sportif Giuseppe Martinelli can celebrate their effort. "The whole team did a stellar job, controlling the race and protecting Jakob for the final climb. Especially the finale was not easy with all the attacks. We are really happy about our win today, Jakob and the whole team were great. Andalusia is always a difficult race, with many demanding stages, therefore we are already looking on tomorrow's stage," Martinelli said.