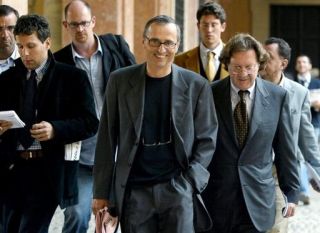 Banned doping doctor Michele Ferrari has issued a statement on his personal website in response to the recent reports linking him with Jakob Fuglsang and the Astana team. The post comes after Astana released a statement of their own distancing the team from the doctor.

The Italian, banned from involvement in cycling for life for doping a number of athletes, released a point-by-point rebuttal to the story published on Sunday night by Danish news outlet Politiken, Danish television channel DR and Norwegian newspaper VG.

The allegations came about after a report from the Cycling Anti-Doping Foundation (CADF) – which alleged meetings between Fuglsang and the doctor, as well as Ferrari's supposed presence with Astana at the 2019 Volta a Catalunya – was leaked to the media outlets.

"Once again I unfortunately find myself compelled to deny the latest media hoax that concerns me," read Ferrari's statement on his website, 53x12.com, going on to state that he hasn't worked with Astana in a decade and hasn't been at a bike race in over two decades.

"The following is my reply to the 'Secret Report' mentioned by the newspaper Politiken:

"I have not had any relationship with athletes from Team Astana for over 10 years.

"I haven't been to Monaco/Nice for at least 12 years.

"I have never been on a scooter/motorbike in my entire life, let alone motor-pacing a cyclist.

"I haven't been to the Volta a Catalunya in 2019. I haven't physically been present at a single race since 1994.

"The 'Report' is based on false reports from probable interested parties.

"I have no base in Lugano, a place where I have never been."

"I have never been convicted of doping."

Ferrari was banned for life in July 2012 alongside Luis Garcia del Moral and Jose Martí, staff members on the US Postal team, as part of the United States Anti-Doping Agency's investigation into Lance Armstrong and Johan Bruyneel's team.

A year later Ferrari was spotted training amateur riders in Bologna, Italy, and in 2014 he was involved in the long-running Padova investigation, which included allegations of money laundering and tax evasion and saw 17 Astana riders linked with him. The investigation was closed without any sanctions the following year

Ferrari was last in the news in 2017, when he was given an 18-month suspended jail sentence after being found guilty of doping biathlete Daniel Taschler. He was later cleared on appeal.