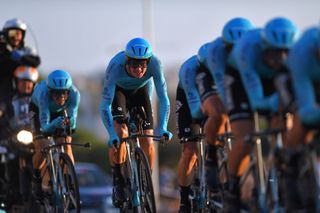 Jakob Fuglsang and his Astana teammates at the 2019 Vuelta a España (Image credit: Getty Images Sport)

In the wake of reports allegedly linking Jakob Fuglsang and Alexey Lutsenko with banned doping doctor Michele Ferrari, the Astana team have issued a press release distancing the team from the disgraced Italian.

In the statement, the Kazakhstani team affirmed its commitment to the fight against doping, noting that its riders aren't authorised to work with any external doctors. The team's statement did, however, avoid any mention of Fuglsang or Lutsenko specifically. The Dane is expected to release his own statement later on Monday.

"Astana Pro team has taken note of the press article by Danish and Norwegian media relating to the existence of an alleged confidential report by CADF suspecting some riders of the team to have been in contact with banned Dr Michele Ferrari," the statement reads.

"Astana Pro Team is committed to the fight against doping in sport. The team requires from all its affiliated riders that they comply all time with all obligations under anti-doping regulations, including the prohibition to be associated with banned individuals or doctors.

"The team does not collaborate with any suspicious doctor, such as Dr Michele Ferrari. The riders are not authorized to consult any doctors external to the team in order to perform any activity, or to be prescribed any diet or treatment, related to their performance."

The team went on to state that its WorldTour license has been renewed for the 2020 season by the UCI, evidence that it has complied with anti-doping obligations required to do so.

"The licence of Astana Pro Team has been renewed for the year 2020, confirming the full compliance by the team with all its obligations, including in terms of fight against doping in cycling," the statement reads.

"The team is in contact with the UCI and CADF in order to know more; it will collaborate with any inquiry that could be opened by CADF or the UCI."

Astana pointed out that no anti-doping procedure has been opened by the CADF or the UCI.

"However, for the time being, no procedure has been initiated against any rider affiliated to the team. The Astana Pro Team trusts that if the CADF had any evidence of wrongdoing by any rider of the team, disciplinary proceedings would have been immediately initiated in accordance with anti-doping regulations and the World Anti-doping Code."

CADF's report, written by an external agency, cites intelligence that Ferrari was present at the 2019 Volta a Catalunya with Astana, and met with both Fuglsang and Lutsenko during the year. A further eyewitness account cited by Politiken state that Ferrari had motor-paced Fuglsang in Monaco.

These allegations, if proven to be true, would fall foul of the WADA Code, specifically Article 2.10, which prohibits athletes from associating (which includes obtaining training or other advice) with any 'athlete support person' currently serving a period of ineligibility.

The rule violation carries a two-year sanction, possibly reduced to one-year depending on the degree of fault, and circumstances.