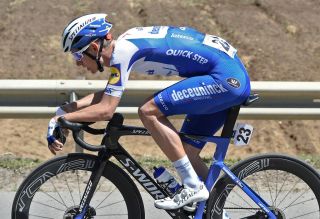 Deceuninck-QuickStep's Mikkel Honoré is set to be out for a number of weeks after fracturing three vertebrae in a crash at the Drôme Classic in the south of France on Sunday.

The 23-year-old Dane had finished seventh at the previous day's Ardèche Classic, and had been looking forward to using that form for his Belgian team's spring campaign.

I am very disappointed as it has come at time when I was feeling in good form and looking forward to the upcoming races," Honoré said on the Deceuninck-QuickStep website. "I'll be patient and look after my recovery in order to try to come back strong as soon as possible."

According to the team's medical staff, Honoré will have to take at least two weeks of complete rest before he can start training again.

NTT Pro Cycling's Giacomo Nizzolo is still looking for his second win of the season – after taking a stage at the Tour Down Under in January – and will lead his squad at Belgian one-day race Le Samyn on Tuesday to try to achieve that, having come close with second place at Kuurne-Brussel-Kuurne on the weekend.

The experienced Michael Gogl will take on the role of road captain, and is ready to organise the team around Nizzolo to try to bring home the victory.

"We saw a very strong Giacomo at Kuurne-Brussel-Kuurne [on Sunday], and he knows that the rest of the boys have the legs," Gogl said on his team's website.

"There were five of us in that first group, and so we should take that experience and race aggressively at Le Samyn. The parcours should suit us, and we should go all in for a win," the Austrian said.

The Frenchman fractured his kneecap in a training crash in August last year, on the back of the Tour, and has slowly been recovering since then. According to L'Equipe, Vuillermoz will make his return at the Volta a Catalunya, which runs from March 23-29.