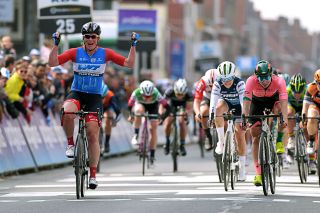 Flanders Classics, the organisers of the Tour of Flanders, Gent-Wevelgem and Omloop Het Nieuwsblad, have launched a three-year initiative to elevate women's cycling in collaboration with KPMG Belgium.

"Women's cycling is already growing at many levels but there is still a lot of potential left. We are very happy and grateful with a partner like KPMG who want to work together with us in the development of the sport in the upcoming years. Hopefully it also inspires other companies to invest in the sport."

The three-year plan includes development of a women's Scheldeprijs, bringing all Flanders Classics races into the Women's WorldTour or Pro Series and ensuring that men and women have the same finish line and joint podium ceremonies.

In the longer term, Flanders Classics hopes to increase starting fees and aim for equal prize money for both men and women's races.

"To start with, we listened to all stakeholders and will upgrade the facilities around our women's races. On the sports side of things," Van Den Spiegel said. "A Scheldeprijs for women to complete the list of Spring Classics is one of the things on our list. The same goes for an upgrade of our non-World Tour races to the ProSeries or WorldTour and the aim to equalize prize money."

Flanders Classics also wants to solidify the already existing partnerships towards the future. "We have a great partnership with VRT (the Belgian national broadcaster) to produce the live broadcasts of Gent-Wevelgem and the Tour of Flanders, and livestreams for the other races with our main partner Proximus. It's common sense that we also want to further develop the potential of the audiovisual product," Van Den Spiegel said.

Van Den Spiegel also announced the start of Dwars door Vlaanderen will move from Tielt to Waregem, De Brabantse Pijl will move from Gooik to Lennik to allow the women to finish in Overijse at the same location as the men.

Gent-Wevelgem will start in Ypres where men's and women's teams will be presented alongside each other.

April 1: Dwars door Vlaanderen Waregem-Waregem with the same arrival as the men

April 5: Tour of Flanders men and women will continue to share the same finale

April 15: De Brabantse Pijl Start in Lennik and share finish in Overijse with the men