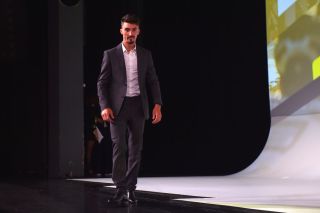 Julian Alaphilippe was reluctant to discuss the nature of his ambitions for the 2020 Tour de France, but nevertheless recognised that the route unveiled in Paris on Tuesday is one that suits him down to the ground.

Alaphilippe went into the 2019 Tour targeting stage victories, and grabbed two, but ended up in the yellow jersey two days from Paris. He eventually slipped to fifth, but had seen his horizons broadened.

Alaphilippe was one of the riders present in the Palais des Congrès on Tuesday to witness race director Christian Prudhomme reveal the 21 stages for next year’s edition. With a relentlessly hilly parcours, he liked what he saw.

Starting in Nice on the Cote d’Azur, the 2020 Tour de France makes an early foray into the hills and there are a couple of key summit finishes even before the Pyrenees are reached on the first weekend. After a couple of stages on the east coast, the races heads back through the Massif Central en route to the Jura – for a summit finish on the Grand Colombier – and then the Alps. The climax comes in the Vosges mountains in the form of a 36km time trial finishing atop La Planche des Belles Filles – the only time against the clock in a route that heads for the hills at every opportunity.

"I’m happy that the Tour goes through the centre of France – above all Châtel-Guyon and Clermont Ferrand, which are very close to my home. What’s more, they’re hard stages, so that’s a good thing," Alaphilippe told reporters behind the scenes at the Palais des Congrès.

"There are really a lot of difficult stages in this Tour. It’s starts out very hard and stays hard all the way to the final time trial. It really is an unprecedented route, which has surprises in store, with a scenario that’s impossible to predict. It’s very good."

After this year’s exploits, the big question surrounding Alaphilippe is whether he will return to the Tour to make an outright bid for the general classification.

"It’s still very far away – I’m not thinking about that," he countered.

"On paper, yes, there are plenty of stages that suit me – that suit me very well, even. But it’s still far away. I have to study the parcours in more detail, and go out and recon the stages, in order to get a clearer idea. For the moment, I can’t say.

"It’s a route that will have surprises in store, and I like it, but establishing a plan and pinning up my ambitions… it’s not time for that just yet."