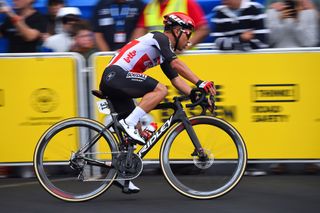 Caleb Ewan dominated Sunday's warm-up criterium at the Tour Down Under but positioning and a good lead-out are as important as pure leg speed in modern-day sprinting. One without the other rarely leads to victory and the Lotto Soudal rider finished an unexpected seventh on stage 1 of the Tour Down Under after being too far back in the high-speed finish in Tanunda.

"We were always in good position and then when we really needed to be in good position, we weren't," Ewan admitted after changing and recovering from the day's stage in the shade of his Lotto Soudal team vehicle.

"That’s racing sometimes, but we’ll debrief it and see where we went wrong and see where we can improve for the next few days. We always want to improve. Today we definitely got it wrong, as we were way too far back, so we just need to do it better next time."

Ewan and stage winner Sam Bennett (Deceuninck-QuickStep) both live in Monaco when in Europe. They are sprinting rivals but respectful adversaries. Ewan made an effort to congratulate Bennett as they slowed beyond the line, graceful in defeat but determined to get revenge as soon as possible.

"He is definitely one of the best riders in the world," Ewan said of the Irishman.

"We are here with a few very good sprinters, I’d say [Elia] Viviani and Bennett are two of the best. To beat them is always going to be difficult and you don't have room for errors, and in a finish like today if you’re so far back there is no chance you can beat them.

"But I’m confident my form and I'm confident in my speed. I know that if I am around them when I start my sprint, I can beat them."

Ewan opted to have a more gradual start to the 2020 season, missing the early January Bay Crits and the Australian national championships. He hopes to again perform well throughout the season and especially at the Tour de France.

"My legs feel good, I'm confident in my form and, as long as the team can get me to where I need to be, I think I can do well," Ewan said.

Stage 2 of the Tour Down Under to Sterling could be a chance for Ewan to get his revenge but the rising finish is not for every sprinter in the peloton.

Ewan won in Sterling in 2018, beating Daryl Impey, Jay McCarthy and Peter Sagan. In 2016, McCarthy won ahead of Diego Ulissi and Rohan Dennis. The wind could also play a factor in the stage and make for a hard day in the saddle before the final surge to the line.

"It’s always a difficult stage," Ewan warned. "It really depends on how the bunch races it. Hopefully, it’s easy enough for the sprinters but we'll see."