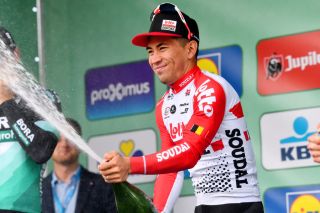 Caleb Ewan will lead what looks to be a very strong seven-man Lotto Soudal squad for the 2020 Tour Down Under, which gets under way in Adelaide, Australia, on January 19.

Ewan was disappointed to come away from last year's stage race without a victory for his new team, having been relegated from first place to last place in the front group on stage 5 at the 2019 edition after having been judged to have used his head to push UAE Team Emirates sprinter Jasper Philipsen off Bora-Hansgrohe rider Peter Sagan's wheel.

Ewan crossed the line in Strathalbyn first, ahead of Philipsen and Sagan, but it was Philipsen who was handed the stage victory – his first WorldTour win – after a long deliberation by race judges.

Lotto Soudal to ride disc brakes only in 2020

The 25-year-old Ewan will be able to rely on a very solid and experienced Lotto Soudal team in 2020, and will look to redress his winless 2019 Tour Down Under, having taken stage wins in all three previous editions of the race.

"This is my home race, and of course I am more than motivated," said Ewan in a press release. "Having already taken seven stage wins at the Santos Tour Down Under, I missed a stage win last season. This year I want to be back on the podium.

"I have the form and the speed to win, but many things will depend on tactics, other circumstances and other sprinters. I'll be ready… I can't wait to start my season," he said.