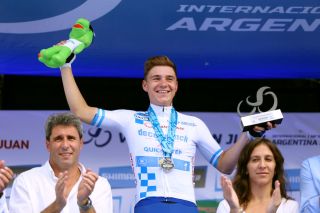 Deceuninck-QuickStep’s Remco Evenepoel receives the leader’s jersey after retaining it on stage 4 of the 2020 Vuelta a San Juan (Image credit: Getty Images Sport)

After posting the quickest mark in the Vuelta a San Juan time trial to Punta Negra on Tuesday, Remco Evenepoel (Deceuninck-QuickStep) wanted to keep tabs on the progress of his rivals who still had to finish. Rather than squint at a small screen in the hot seat, Evenepoel procured a deck chair and placed it in the finish area beneath the big screen, watching intently until Filippo Ganna (Italy) had crossed the line with a deficit of 32 seconds. There were more riders to finish, but he had seen enough: stage victory and the overall lead were his.

Atop the mountain ridge that brought the peloton through the Parque Provincial Ischigualasto on stage 4, Evenepoel again found himself keeping a close eye on his rivals, particularly when Guillaume Martin (Cofidis) upped the ante on the third and final section of the wind-buffeted ascent. A vigilant Evenepoel moved swiftly across to the small group that formed in pursuit of the Frenchman. It wasn't exactly as comfortable as the deckchair of the previous evening, but Evenepoel pedalled with notable facility all the same.

"They started to attack, and I just wanted to be as fast as possible on the wheel of each attack. I could follow quite easily, and that was good for my confidence," Evenepoel said. "I had good legs following the attacks."

After climbing through the haunting provincial park, the peloton encountered heavy rain on the long, fast drop towards the finish in Villa San Agustín, but Evenpoel was unfazed.

"We knew there could be more scenarios with the wind," he said. Few would have anticipated that one such scenario would involve Evenepoel clipping away to pick up a bonus second at the second intermediate sprint, thus extending his overall lead to 33 seconds over Ganna and 1:09 over Oscar Sevilla (Medellin) by day's end, where the 20-year-old finished safely in the body of the peloton as Fernando Gaviria (UAE Team Emirates) took stage victory.

"In the end, I just wanted to reach the 3km mark, so I let myself drop a bit into the bunch," Evenepoel said. "I didn't want to be involved in the sprint because I don't think it's necessary for me to go and sprint or help the lead-out, because I'm in the white leader's jersey, and that's the most important thing. We wanted to defend the jersey, and we did it well, because I took one second more."

The Vuelta a San Juan breaks for a rest day on Thursday – a rarity in a stage race of this length, but perhaps a necessity given that the riders would not arrive at their hotel until nigh on midnight due to a transfer of more than three hours following stage 4. The race resumes with the pivotal summit finish at Alto Colorado on Friday.

Twelve months ago, when Evenepoel was making his debut as a professional after graduating directly from the junior ranks, he drew notice for his ninth-place finish behind Movistar's Winner Anacona. This time out, the young Belgian approaches the ascent with considerably greater ambition. It was revealing, perhaps, that he said his team planned to win more stages this week, "with me, Alvaro [Hodeg] or maybe somebody else".

"Last year I was in another position; I had to work for Julian [Alaphilippe]. This year I'm in a defending position, and I have quite a big advantage. I don't need to attack. I only need to follow and try not to lose the wheels," said Evenpoel, who has identified Team Medellin's Oscar Sevilla as his most dangerous rival.

The 43-year-old Sevilla turned professional more than two years before Evenepoel was born, and has not raced for a European team since the aftermath of his implication in Operacion Puerto, but he has built a remarkable palmarès in South America over the past decade, including overall victory in this race two years ago.

The haul to Alto Colorado brings the race to an altitude of 2,565 metres, and the altitude and sheer length of the ascent are rather greater obstacles than its modest average gradient of 4.4%. The ascent is officially 15km in length, although, in truth, the road climbs for almost the last 50 miles of stage 5. It makes for an unusual sort of challenge, but one that does appear not to daunt Evenepoel.

"Is it a climb that suits me? It doesn't feel like a climb…" Evenepoel said. "Actually, you're climbing for 80km, so you're climbing for almost three hours. The hardest part is at 3km to go. The thing is there's always an echelon. There was last year and the year before as well. I'm not a heavy guy, so normally every climb should suit me, but we'll see."