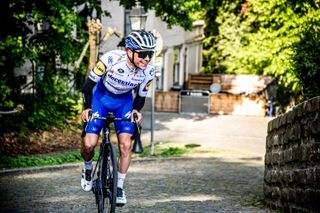 Remco Evenepoel (Deceuninck-QuickStep) has confirmed his initial race programme for when his season restarts in late July. In August, he'll head to the Tour de Pologne ahead of a Monument debut at Il Lombardia.

The 20-year-old is currently in the Dolomites with his team as they prepare for the season with an 18-day training camp, and he will join Sam Bennett and Yves Lampaert at the Vuelta a Burgos before he travels on to Poland.

"It will be my first time in Poland and I look forward to it," Evenepoel said in a statement released by the team. "I will start the Tour de Pologne without any pressure. I have already proven that I can compete for the win in this kind of stage race. Also, my main goals are later in the season.

"But we'll see how I'll feel and if the opportunity presents itself, I won't waste it. If I feel really well, I could still go for a stage win or the GC. I don't have to prove myself, but I always expect a lot from myself."

Evenepoel: Can I win the Giro d'Italia? Let's see on October 25

The two stage races will form the lead-in to Evenepoel's first main goals of the season, namely Il Lombardia and the time trials at the Belgian and European Championships later in the month. Evenepoel is the reigning European time trial champion, having beaten Deceuninck-QuickStep teammate Kasper Asgreen by 19 seconds in Alkmaar last year.

As for what to expect in Lombardy, Evenepoel said that the warmer weather than usual – the race is usually held in October – will be a factor, adding that he hopes to be on top form by the time the race comes around.

"I will try to be in peak condition by then. It's a beautiful and prestigious race," he said. "We've already been talking about it with the team. We'll have a strong line-up as it will be very tough. If I have to compare it to a race I've already done, I'd say the Clásica San Sebastián, but I expect it to be even tougher.

"The weather will be crucial this year with temperatures that could easily rise up to 30 degrees. It doesn't really scare me, I think I can handle the heat, but the combination of high temperatures, fluid loss, technical descents and demanding parcours will make it a hard race. After all, that's why it's a Monument."

Evenepoel looks set to face off against a stellar field at the Belgian Championships, with a number of strong time trialists hailing from the country. Current time trial champion Wout van Aert beat Evenepoel into third by 39 seconds last year, while Yves Lampaert and Victor Campenaerts completed the top four.

"As a European champion and silver medalist at the World Championships, I can't aim for anything else but the win at the Nationals," Evenepoel said. "It would be a little bit silly if I said I'd just go for the top 5, even with the world class competitors I'll have to face.

"There are at least five other world class time triallists in Belgium, so finishing fifth, a couple of seconds behind the race winner is a perfectly realistic scenario. That's why it's important to me to keep the faith in my own abilities, focus on myself, and ride as hard as possible on that day."

Two one-day races – Druivenkoers-Overijse and the Brussels Cycling Classic will round out Evenepoel's August before his attention turns to the Giro d'Italia, with Tirreno-Adriatico coming in September during the build-up to his Grand Tour debut.

"I look forward to spending the weekend racing in my hometown region," he said of the two Belgian races. "One of the climbs in the Brussels Cycling Classic, the Keperenberg, is only three kilometres from where I live, so I know the parcours well. It will be nice to race so close to home with the Wolfpack."