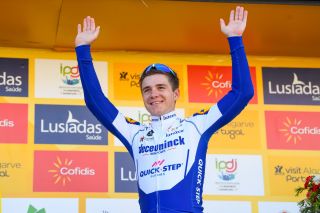 Deceuninck-QuickStep’s Remco Evenepoel steps onto the podium to be crowned the overall winner of the 2020 Volta ao Algarve (Image credit: Bettini Photo)

Deceuninck-QuickStep's Remco Evenepoel has reiterated that this year's rescheduled Giro d'Italia – which is set to take place from October 3-25 – remains his main goal of the season. When asked in a video interview that was part of Belgium's Red Nose Day fundraising event whether he could win the Giro overall, he smiled and said that everyone would have to wait until the finish in Milan at the end of October to find out.

The Belgian version of Red Nose Day – part of British charity Comic Relief's fundraising efforts, which raises money for people in need both in the UK and abroad – was first run in 2015, seemingly exclusively in the Flanders region, with most of the money raised by Rode Neuzen Dag invested in the mental wellbeing of young people by being donated to schools and organisations. Part of the money also goes to Comic Relief for international projects.

Evenepoel was interviewed by Belgian singer and presenter Laura Tesoro, who pulled no punches in asking whether Evenepoel was going to win the Giro in a video published on the Het Laatste Nieuws website on Wednesday.

"Am I going to win the Giro d'Italia?" he laughed, repeating the question to give him a little extra time to consider his answer. "I'd like to, and my preparation is all about doing well at the Giro. Hopefully I can answer 'yes' to the question on October 25."

Spain's two-time Giro winner Alberto Contador recently said he considered Evenepoel one of the big favourites for this year's race.

"If I feel good, I'll try to fight for the maglia rosa. It could be for a few days or until the last day, which would be pretty good," the 20-year-old Belgian told La Gazzetta dello Sport earlier this month.

As part of Red Nose Day on Wednesday, Evenepoel was also asked about mental health and stress in his job.

"We have someone like that on the team," he replied when asked whether he ever used a sports psychologist. "Every now and then, we have a conversation with them. And when you start talking about things, you can resolve things that were on your mind. It helps a lot, and I have certainly used it before.

"I often have healthy stress. It gives me motivation and adrenalin, and makes me feel like cycling faster. Stress never negatively affects me – not even during the biggest races, it turned out last year," Evenepoel said, referring to his first professional season in 2019, when he won the Clasica San Sebastian, the overall title at the Baloise Belgium Tour and became the European time trial champion.

"For example, for a time trial, you have to wait all day to cycle for half an hour," he explained. "The whole day is then all about those 30 minutes. Then you have to be able to deal with tension, and that's one of my strongest points."

This season, Evenepoel has already won stages and the overall titles at both the Vuelta a San Juan in Argentina and the Volta ao Algarve in Portugal in February. Following the sport's shutdown during the coronavirus pandemic, he's now set to renew competition at the Vuelta a Burgos in Spain on July 28.