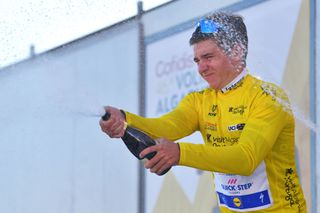 On the final day of the Volta ao Algarve, overall leader Remco Evenepoel (Deceuninck-QuickStep) stormed to victory in the final time trial to seal his second stage race victory of 2020.

The Belgian was expected to seal the overall win ahead of Max Schachmann (Bora-Hansgrohe), and duly did so with the German finishing 38 seconds down over the 20km course in Lagoa.

What was more surprising was him putting ten seconds into Rohan Dennis (Team Ineos), the man who had beaten him to the Yorkshire Worlds time trial title by 1:09 last year.

"Beating Rohan Dennis is very difficult, so that makes it twice as nice," Evenepoel said after the finish. "For the general classification, I just had to ride as fast as possible. That I won the stage as well is an added bonus."

Heading out onto the course, with its mixture of technical sections and hills, Evenepoel didn't need to risk it and go for the stage victory, but went fast from the start, setting the fastest time at both checkpoints, going top of the leaderboard by 15 seconds at each check.

"I'm really happy with this win," Evenepoel said. "I knew it would be 20km at full gas, so I started quite quickly because I knew I had to recover in the downhills and the hilly sections. I took every chance to do that.

"The communication with the team car was also perfect – I knew every corner and every hole in the road, and I had a good day."

The 20-year-old went on to explain that he had earlier messaged his girlfriend, Oumaïma Rayane, to tell her he was going to go well, saying: "I sent a message to 'Oumi' before I got changed that I was going to shine for us today. If I say something like that then I usually end up close."

Evenepoel's first major goal of 2020 is set to be the Giro d'Italia, where he'll make his debut in two months' time. Earlier this week, he said that he's not at his best yet, also telling team boss Patrick Lefevere that he could lose two kilograms before May.

Come the Giro start in Budapest, there'll be a better version of Evenepoel to contend with, while he also warned that he's not thinking too far in advance, instead he is taking the season race by race.

"The Volta ao Algarve is not a three-week race like the Giro," he said. "That is something altogether different. I'm just working towards my goals now, and I want to be prepared in two months. I'm not in the best shape yet, but I have time and I'm working towards my best form. I'm happy with where I am now.

"Next up will be Tirreno-Adriatico, and then we'll see what the season brings. We'll go step by step and race by race. Tokyo is a long way away.

"It was my first time in Portugal, and it was really fun. I'm glad I got to race here with good weather and good roads. First, we had the stage win with Fabio [Jakobsen], and then I won and took yellow, then we controlled and took the stage win and yellow jersey home. It was perfect."