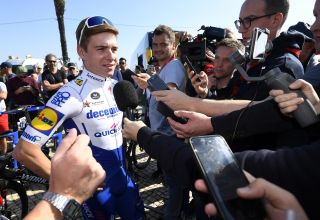 Deceuninck-QuickStep team boss Patrick Lefevere made his way to the Volta ao Algarve on Thursday evening, hours after one of his stars, Remco Evenepoel, took the stage win and race lead on the Alto da Fóia.

The Belgian held court outside the team bus at Friday's stage 3 start in Faro, talking to the assembled reporters, including Cyclingnews, about Evenepoel's performance and near future.

Lefevere – who celebrated the win on a delayed plane to Portugal – said that his young charge isn't yet on top form and contrasted his ride to other big names at the race, such as Vincenzo Nibali (eight yesterday) and Geraint Thomas (who finished 20th).

Evenepoel back in action at the Volta ao Algarve

Evenepoel: Vuelta a San Juan gives me a lot of confidence

"He's certainly not in shape too early," said Lefevere. "Cycling has changed in recent years – you can see that even the big names win in February and are still on form at the Grand Tours. Thomas and Nibali are not in top shape yet, but when you see on Twitter that they have done 250km training rides in December and January, I wonder what good it has done…

"Our plane was 50 minutes late and I have never been so happy to be delayed. I was impressed when I saw his attack. It's a long climb and everyone was on the rivet when López attacked, but Remco still rode away and had that in his legs."

A series of dominant performances – including numerous solo victories by several minutes – at junior level throughout 2018 saw Evenepoel signed up by the Belgian squad at the age of just 19 years old.

Last year, he only got better as the season went on, impressing at season opener, the Vuelta a San Juan, then going on to win the Baloise Belgium Tour, a stage at Adriatica Ionica race, Clásica San Sebastián, the European time trial title, and silver at the Worlds time trial.

With victory in San Juan already under his belt this season, and debuts at Liège-Bastogne-Liège and the Giro d'Italia on the horizon, it's no surprise that people are already wondering how far he can go as a professional.

"I don't know where it will end," said Lefevere. "We're still discovering his potential. After last year he took steps again during the winter, and while it might sound pretentious, he's not in top form yet. There's still some gains to be made."

Lefevere has mentioned those gains before, last year saying that Evenepoel could lose weight to improve performance. The subject came up once again in Faro, with the 65-year-old noting that Evenepoel should be two kilograms lighter come the Giro.

"Remco messaged me on WhatsApp saying 'I weigh so much now. For the Volta ao Algarve I need to lose 1kg, for Liège and the Giro I need to lose two more and I will be there.'

"He needs to be sharp for the Giro. Between now and the start in Budapest he can easily lose 2kg."

Regardless of future weight loss plans, Evenepoel remains focussed on the task in hand, namely sealing overall victory at the Volta ao Algarve. He currently leads the race ahead of Max Schachmann (Bora-Hansgrohe) with the pair level on time.

The main obstacles lying between him and a third career stage race victory come at the weekend with the hilltop finish at the Alto do Malhão and the final day time trial in Lagoa. Evenepoel re-iterated that he's looking to take the race day-by-day.

"We will look at things day-by-day," he said. "Tomorrow we will climb again. It's not like yesterday but it'll be tough. On Tuesday there will be another time trial, so I have to concentrate for another three days.

"Tomorrow will be a war but I have to use my legs and see what happens. But it's good for me that there's a time trial ahead."