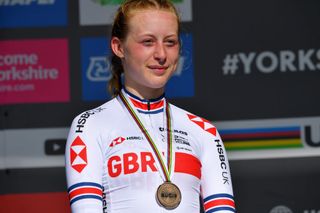 Elynor Backstedt is now home and recovering from a mountain bike crash that resulted in a fractured tibia Sunday. The British rider spent one night in hospital, and although she may need to undergo surgery to correct the fracture, she has returned home in South Wales.

"I’m currently still in a lot of pain and discomfort, however, I’m super happy to be back home with my family and my boyfriend. I’ll keep you all updated with any progress. Thank you to everyone for all your get well soon messages!" Backstedt said in a team press release.

Trek-Segafredo confirmed Sunday that Backstedt, the youngest rider on the Women's WorldTeam, had fractured her tibia in a training crash and was taken to hospital for treatment. The team later confirmed that its head physician has spoken with doctors at the hospital, and that a decision on whether Backstedt would require surgery had not yet been made.

The team confirmed on Wednesday that Backstedt will see a specialist later in the week to assess whether the alignment of the bone is correct and determine whether surgery is necessary.

Backstedt's father, Magnus Backstedt, said he was with her when she crashed. They were mountain biking in some local forests close to their family home in South Wales when she suffered the accident, according to the team press release.

She was descending a steep off-road section at around 10kph when her front wheel lost traction and slipped away, causing her to fall.

"We had been for an MTB ride in one of our local forests and were on our way back," explained Magnus Backstedt. "Coming down a relatively steep off-road descent, her front wheel slipped and washed away, and she didn’t manage to put her foot down in time to catch herself so ended up with it underneath herself and the bike.

"She was doing about 10kph at the time and I was right behind her. It looked like one of those little tumbles that you would stand up and laugh about because it was so slow, but she squealed and I knew something was wrong straight away!"

Backstedt was transported to the nearby Royal Glamorgan Hospital where X-rays confirmed that she had a spiral fracture of the tibia. She was kept overnight for monitoring and discharged early afternoon, on May 25.